Tales of a Dogsitter - HOW MANY DOGS? 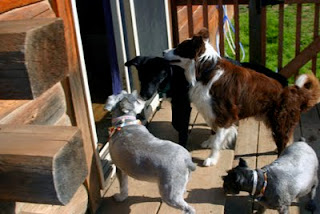 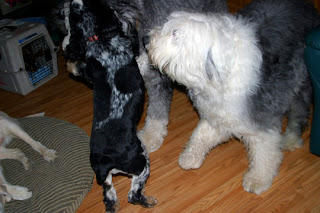 I have so many dogs tonight that I had to write a blog and do a roster to figure out who is here. It is midnight and I just finished the doggie treats. My kitchen space is small so I have been tripping over dogs because they insist on lying by my feet wherever I am, at least six of them. Every time I turn around I either trip, fall, step on a tail, stub a paw or something. I find myself shuffling along, rather than walking. I know it sounds like an absurd way to live, but I just keep smiling and drinking wine.

I’m having an 8-dog night in the bed as we speak. A webcam is a good idea but I don't have time to deal with it, as you can well imagine. At last count there were 16 dogs here, 17 until one of the owners got off a boat for the night, picked up his dog and will return him tomorrow. Of course it was the one dog that is the least amount of trouble. Will any others leave? I think maybe one dog goes home tomorrow, and there is a mass exit on Sunday, but then of course more are coming. I don't even try to figure it out anymore, I just go with the flow.

Summer has finally hit Homer a bit late this year, as it is the middle of July already! There is mucho snoring going on at TBTB tonight, where there is now a mix of Big Dogs & Little Dogs. The roster for the big guys is: Bear, LeLu, Mikey, Teddy and Buddy. That leaves the little guys: Cammie (pint-size), Joe Moore, Yeager, RockDog, LucGoose, WoodBoy, Zippy, Anne, BunBun Roush, Gracie, and Tigger. With the current head count, breakfast should be a hoot in the morning. Am I insane, or just a little weird? Sometimes even I wonder? But, I’m having a ball, and I think that’s what life is truly about. 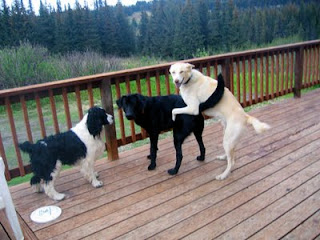