Tails-by-the Bay has gone international! I have a dogsitting gig in Paris for two weeks in September, and again for the better part of December. Now how you might ask, did I manage that? Well, it’s one of those networking deals – a friend-of-a-friend-of-a-friend thing.

When people ask why I am going to Paris – do I really need a reason? – I tell them I am dogsitting and they are for the most part, flabbergasted. The Alaska Airlines attendant asked the question when I checked-in and was so amazed that she shouted to her coworker at the next desk – “she’s going to PARIS to dogsit!”

Well okay it’s not a paid position. But it is a trade for an apartment on the Boulevard de Grenelle a stone’s throw from the Eiffel Tower in the 15th Arrondissement. To explore and live like a Parisian with a dog to show me the way, can it get any better? Needless to say I am thrilled for the opportunity to hang-out with a black and white Dalmatian named Bella in the City of Light where we will become Tails-By-The-Seine for a time.

Life continues to be amazing for the dogsitter extraordinaire!
Posted by K at 12:31 AM 1 comment:

A Tribute to LeeLoo 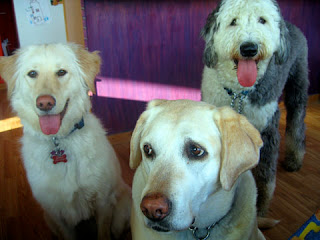 The hardest thing about this job is saying goodbye to the dogs that cross the Rainbow Bridge. If dogs have a single fault it is that they just don’t live long enough. But of course that’s not something they have any control over, it is the law of the Universe. They are sent to us as messengers of a better way of thinking, living and loving. Our job is simply to observe and listen.

I said goodbye to LeeLoo, one of my favorite labs of all time by giving her a big hug and thanking her for spending time with us at TBTB Dog Camp. Her tail was still wagging. The sweet face with the chocolate brown eyes gave me an all-knowing look that she was ready. Driving down the hill a short time later, a heaviness suddenly filled my heart that I knew was her final goodbye. A few minutes later her mom texted me to say she had gone peacefully.

LeeLoo struggled with grief over losing her dad last winter. Her mom shared an amazing story about the strong bond she had with him. A few weeks before he actually passed away, he coded at 2 AM at an Anchorage hospital, over 200 miles north of Homer. LeeLoo was staying with a family friend who later said that at 2 AM she became distraught – pacing and whining, unable to be consoled. Apparently LeeLoo did not settle down until around 4:30 AM – about the same time her dad’s condition was stabilized. At the time the friend was unaware of what was happening at the hospital. But LeeLoo knew. 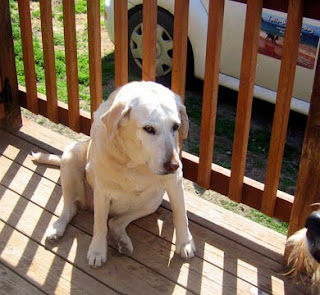 LeeLoo was an institution in her own right. Serving her family for over 12 years and being a regular at TBTB Dog Camp, she will be greatly missed by many – both humans and canines. She was a happy dog – always coming to Camp with her tail wagging and a smile on her face. All dogs responded to her positive energy and mellow ways. After a recent diagnosis of lymphoma, LeeLoo arrived at Camp only a week ago with the same good attitude, appetite and a determination to go on trail walks with the rest of us. We sent her home thinking she had improved with the steroids and would beat the odds of this dreaded disease. But, it was not to be. After only a few days she rapidly started going downhill and it was obvious that she was suffering, albeit with a smile on her face.

It is never easy to say goodbye for those of us left in the physical world. Her presence will be missed at TBTB especially when her siblings come without her. I loved her like my own and will always remember her sweet disposition and beautiful face. LeeLoo you were sick and now you’re not. You are once again whole and free of all suffering. You are now with you dad, OgDog and other friends over the Rainbow Bridge. RIP Sweet Girl. Your job at being a Great Dog in this lifetime was well done. 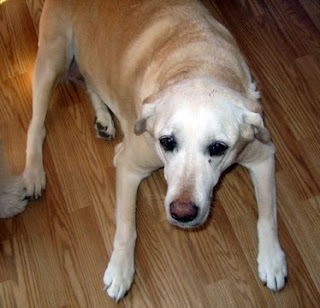