A rainy day at TBTB Dog Camp means biscuit baking time. All the dogs gather in the kitchen in hopes of cleaning a bowl or grabbing a scrap off the floor. Funny, they always seem to know what’s cookin’. Today it’s Tuna Bites, a simple recipe with no wheat, soy or corn. I make enough for the canine cookie jar, plus more to sell at the local bakery. Lots and lots of Tuna Bites with Parmesan cheese - baked, cooled and placed inside organza paw print bags. The smell of the freshly baked pastries fill the nostrils of all dogs near and far, as their sense of smell is much better than ours. Having said that, you can probably guess where this is going. . .

The process took all morning by the time I cleaned up, packaged the bakery treats and filled the treat jar. Incidentally this jar is a large black and white dog with a toothy smile. When the lid opens the sound of “You Ain’t Nothin’ But a Hound Dog” or “Who Let the Dogs Out” rings out causing all TBTB dogs to scamper toward it. They are conditioned to run to the kitchen for a treat when they hear the voice of Elvis bellowing. After giving each of them a Tuna Bite treat, I put RockDog and Anne in their crates, a few big dogs on the front deck, a few more on the back deck, leaving the rest free to roam the house while I go out to run errands.

When I return in less than an hour all I see are chewed up paw print organza bags on the kitchen floor. “Anne” I said, “what did you do?” I knew it had to be her because she can jump and grab off the counter with the best of them. And then I remembered, Anne’s in her crate and so is RockDog, the two biggest food-snagging offenders. Sorry guys! I then turn to ZipDog, the other chowhound in the group. She looks at me as if to say: “you’ve got to be kidding.” Of course I then realize that the treats are at the back of the counter and there is no way with her short legs, that she could possibly be the culprit. I always blame my dogs before even thinking of any dogs in camp. But this time it’s apparently not a Roush dog.

I scan the crowd and see a very sheepish German Shepherd called Denali – a newbie in camp. She is certainly tall and lean enough to stand at the counter and reach the treats. The other possibility is Teddy, a yellow lab that is a TBTB regular. But, I always leave Teddy in the house and he has never touched a thing – he just makes himself at home on my bed while I’m gone. 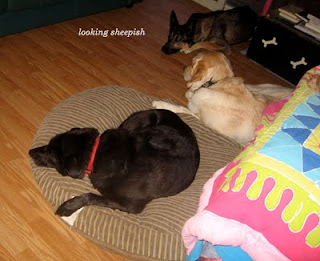 So the question becomes, Whodunit? Which dog is guilty, or maybe there is more than one? The bottoms of three bags were completely chewed out and the contents devoured. Each bag weighed a pound so that means somebody ate 3 lbs. of biscuits and were probably about to finish off the other 5 lbs. when I returned. A few choice words escaped my lips causing all the little darlings to run for cover (guilty or not), while I cleaned up the shredded bags. All that work. . . down the gullet, probably inhaled rather than savored. Grrrrr! 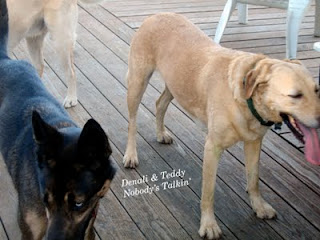 Denali’s humans came later that evening to pick her up and I ask if she had ever counter surfed at home, and her mom got a sheepish look on her face – must run in the family? Her response was something to the effect “yes, what did she do?” I explained the biscuit incident and took full blame for leaving them on the counter in the first place, as I should. The dogs at TBTB are always ready to cease the moment if I err in judgment, especially when food is involved. 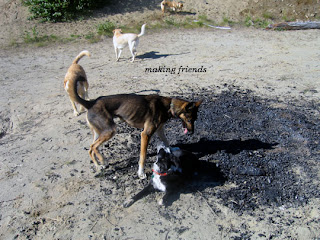 It was obvious that Denali made many friends that afternoon as they all wanted to play with her and sniff her lips. I do wish I had a web cam. I suspect Denali got the biscuits down from the counter and they all had quite a feast on Tuna Bites. And in the process, she became their hero. Dogs are opportunists at heart and can rarely resist their nose guiding them to some yummy treasure stashed somewhere. And who in their right mind would leave dogs home alone with freshly baked treats within their reach?

Jenny arrived at dog camp inside a soft crate along with her granola and thyroid pills. Her tag read “Our Jenny” and she is 17-1/2 years old. She could have been a doggie movie star dancing and twirling on her hind legs the way she used to do for treats. After all she comes from a family of musicians, singers, and dancers. But instead of the glitz and glamour of star life, Jenny chose to raise three boys who are now men, and in the process became an elder herself. She is originally from Manhattan, but her golden years are now spent in Homer where the grass is greener, the beach is friendlier and there are so many bushes to sniff, and get lost in if you weigh next to nothing. Jenny now prefers the slower, relaxed lifestyle.

Her hair is curly white but her ears stick straight up, and she weighs all of 5 lbs. soaking wet. She is a mixed breed, part Chihuahua and part Poodle. She is still spunky - if you try to clean the sleep from her eyes in the morning she fights it. She paces in circles and then sleeps in the C position until she feels the urgency to pee. Jenny then performs a little dance (on four legs these days) indicating to anyone listening that it is definitely time to go outside. Her appetite is great, especially when you offer her halibut and salmon for breakfast, lunch and dinner – topped with the granola for fiber.

Who wouldn’t love Jenny? My friends want to take her home because she is just so adorable. And the dogs in Camp, well that was interesting to watch. As she stood in the midst of the herd, they all made room for her to pass by. You could sense an all-knowing respect among them as she sauntered toward the water bowl and the path opened up for her. I was concerned to have her sleep on the bed for fear she might fall off. But all the resident dogs surrounded her, making a barricade so if she got up, they too would get up and in the process wake me. I wasn’t aware yet that once Jenny went to sleep she wouldn’t move until morning. 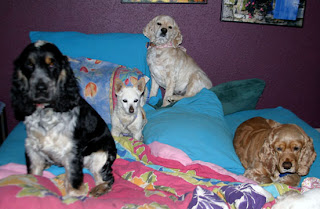 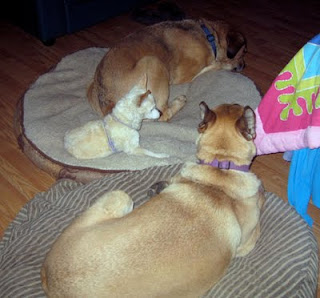 I fed her on the counter away from the crowd, and usually did the breakfast dishes while she ate her meal. On this particular morning I made her oatmeal mixed with granola, yogurt and doggie kibble and put her beside me on the counter. As I was doing the dishes I glanced back just in time to see her standing in the middle of the French lemon tart that was left over from last night’s dinner party. Both of her front paws were in the middle of the pie dish and her snout was buried deep in the lemon filling lapping it up as fast as she could. Oh, Jenny! At 17-1/2 years old you can eat as much lemon tart as you want. She was oblivious to me, totally enthralled in the joy of the moment. Next to her sat her untouched breakfast. I grabbed my camera and got the shot. 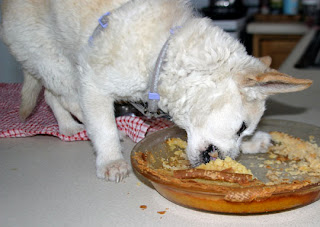 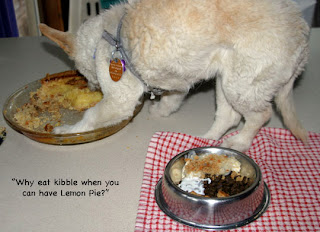 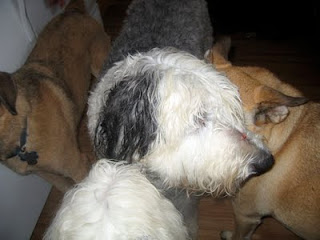 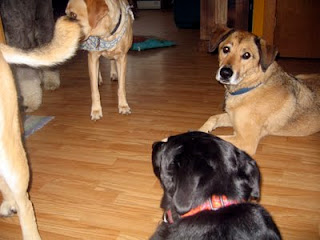 Okay, so TBTB Dog Camp has finally reached the max in doggie numbers. It was Salmon Stock weekend - a music festival in Ninilchik. I think most of Homer town was there enjoying the music in torrential rain on Saturday, and drying out in the beautiful sunshine with more music on Sunday.

Having 18 dogs for the weekend was a bit overwhelming to say the least! But it’s the Law of Attraction - it's like seeing myself with 18 dogs and BAM - here I am. To make it really interesting I took another one on Sunday morning for the day. A lovely little mini-Schnauzer with Cushing’s disease – how could I possibly say No? Sophie #2 brought the count up to a grand total of 19 and holding.

In order to get the herd to settle in for the evening, I have to sit down at the kitchen table to write this and not move much. You can hear a pin drop right now, well almost except for Gato Barbieri and his Sax. However, if I even move an inch at this point of course everyone will be up and ready - for what I don't know since they are all still drenched from their last quick pee in the downpour, and so am I.

It's the aroma of wet dog mixed with California white sage that currently fills my nostrils. As I sit writing on the computer with my glass of Malbec nearby, they are everywhere - under my feet, behind my back on the chair, on either side of me on the floor, in my lap, looking over my shoulder as I type, in front of me on the floor, and behind me on the couch. DOGS in all shapes and sizes as far as the eye can see. It makes me smile to see them content to be in the moment of whatever I choose to do. Where else is everything all about me?

I can't exhale too loudly for fear of waking them up at the moment. When I do get up I will need to shuffle to walk. This is a problem. Heaven forbid I have to go upstairs for anything because they will be lined up behind me on the steps when I turn around to come back down. Whatever I need, I can live without just for the peace and quiet of the moment. It’s hilarious but some people probably think I need a therapist. 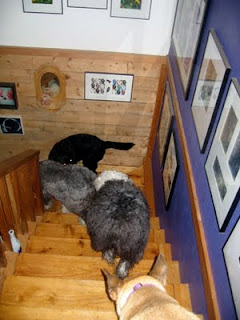 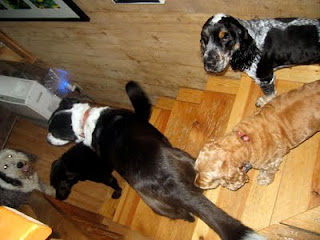 And the roster? Well there is Bear, Mikke, LeLu, Penny, Cooper, Zep, Isis, Buddy, Misha, Qimmiq, Sophie 1, Sophie 2, and Kirby, plus the resident dogs: Luce, Woody, Zippy, BunBun, Anne, & RockDog. Wheew! That should be everyone. I actually have a call list to check them off when we come in from our walks.

And, did I mention that Buddy the California boy, is so scared that he tries to climb the walls? Literally. . . I have to corral the others away from him so he can relax on top of the large crate in the dining area by the door. Of course this makes all the dogs even more curious. Buddy’s sister Misha the Keeshond stays by his side, although I can tell she would much prefer romping with the others. 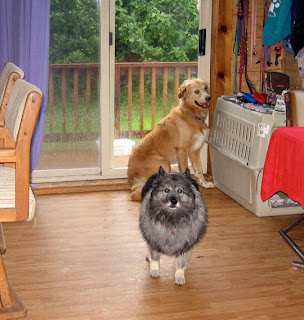 This is totally ludicrous, but I'm smiling - no complaints here. My life with dogs is not only a good time, but it cracks me up. Maybe I need a bigger house?

For anyone who thinks dogsitting sounds like a good idea, rest assured you must have a sense of humor, think like a canine, have a ton of energy stored up, and be prepared to be on your feet from sun-up to sun-down, especially when you have 19 dogs free in the house!