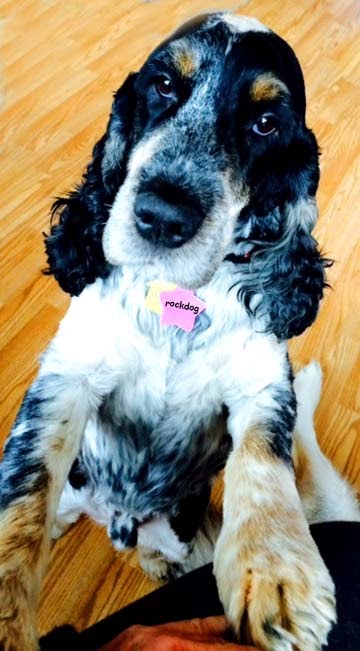 After yoga this morning, I went to Safeway to buy some kale for my morning juice fix. RockDog was with me in VeVe like always, but BunBun stayed home today. I arrived in the parking lot, pulled VeVe into a spot not far from the open doors of the grocery store, got out of the car and turned around, like normal, to tell him I would be right back. And, he was GONE!

He was not in his seat, nor was he in the backseat. WTF happened to him? I looked around the parking lot; walked to the other side of the car, looking inside again to see if he was lying on the floor, but PRESTO. RockDog had vanished. How could he do that so fast? He is always obedient and has never jumped out, especially right under my nose. I sternly shout the emergency recall: RockDog, NOW!

I saw people at the Safeway doors laughing, and noticed a guy trying to get my attention by pointing inside. Seriously? RockDog was running in Safeway? I ran inside where a few other people were pointing and snickering in the direction of the pharmacy. When I got there, I caught a glimpse of his blue roan coat running in the back, to the next aisle over. Again, the emergency recall: RockDog, NOW!

I had to say it really loud, getting the attention of even more people. I saw him pause and start running back in the direction he came in. He heard me, but couldn’t find me in all the people. I cut him off at the next aisle and told him to SIT! And, he did. I then escorted my cute little English cocker spaniel to the front of the store, out the door, and across the parking lot to the car, as the crowd cheered us on. He jumped inside VeVe and resumed his position on the passenger seat, wondering what the problem was. “What were you thinking?” I said. “You could have been hit by a car in the parking lot.” He stared at me, wiggling his stubby little tail and butt at the same time.

I’m sure he was curious about where I go every time I leave him waiting in the car, returning with several bags of good smelling food. He must have decided enough was enough. He wanted to run in and check it out, and had to do it quickly before I saw him. As soon as he heard me, he knew he would have to come. He was just trying to avoid me long enough to investigate the place where all food must reside. It’s probably a good thing he headed in the direction of the pharmacy, a turn the other way would have landed him at the meat counter, nose level with all things good in his carnivore world! 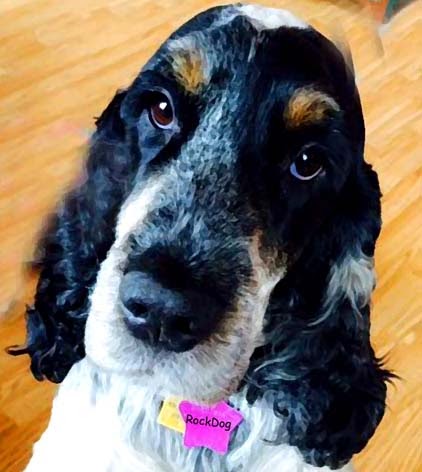 RockDog, you are a good boy. I’m just glad you didn’t snag a steak and run through the aisles with it dangling from your lips! Although, I’m sure the crowd would have cheered you on!