I’m invited to Dr. & Mrs. Smith’s dinner party on Thursday evening. He’s heard I’m a good baker so he requested I bring the dessert. I’m substituting at school all week so it has to be something seasonal and easy because time is a factor. I decide on a pumpkin spice cake with a Grand Marnier cream cheese frosting. I can mix, bake, cool and ice it in just the amount of time I have between getting home from work and being at the party by 6:30. I shop during my lunch break and begin the baking process when I get home. The timing is perfect. I take the cake out of the oven and place it on my bistro table to cool while I go to the bathroom for a quick pee.

When I return to the kitchen I am aghast at the scene before me, so much so that it takes a few seconds to register in my brain. Anne is on top the bistro table, gobbling up the cake so fast that crumbs are flying and the other dogs on the floor are catching them in midair. When she sees me she scurries off the table straight into her crate. Holy Shit, it is 6:00 PM and the entire top layer of the cake is demolished – and I’m talking in nanoseconds. Had I been even 10 more seconds in the bathroom the entire thing would have been gone. I am so pissed I can’t even speak, and she knows it that’s why she’s hiding. I slammed the door on her crate without saying a word. What to do now? I have to tell them.

I text Mrs. Smith because it’s easier than calling: “Forget the dessert, Anne ate it. Sorry”. I’m so embarrassed I don’t even want to go. How the hell did she get up there? A bistro table is tall enough to be cocker-proof and I always shove the chairs all the way in to prevent table surfing. I assume she jumped on her crate and leaped three feet across the room and onto the table. With the aroma of pumpkin filling her little nostrils, apparently she just could not resist. Sigh. . .

My cell rings and a man says: “Hi Karen, this is Bob.” I say hi not having a clue who I’m talking to, as I’m still in cake shock.

“You know I used to use the same excuse when I was in medical school and late turning in a paper - the dog ate it.” What? Oh, it’s Dr. Smith.

“Oh Bob, I am so pissed off, sorry about the dessert. And I just sent you a photo to prove it” I say.

“I have a terrible sweet tooth, bring what’s left of the cake and I will eat it.” Of course I think he is just being nice and trying to make me feel better. But no, he insists that I bring the remainder of this gnawed out spice cake. I hang up thinking he can’t be serious. I then get a text from his wife, “he’s such a sweets whore, bring the cake. He will eat it.” Okay, so I take the cake.

Dr. Smith meets me at the door and immediately grabs a bite of the spice cake as I set it down on the counter with the icing container. “Wow, this is really good and it doesn’t even look that bad. Maybe we can fix it?”

Mrs. Smith gets a large glass platter out of the cabinet and we flip the cake out of the bundt pan onto the plate. We begin working with the icing, filling in the sagging areas - a little lopsided, a bit flat but not too bad considering the bottom half has been gutted like a slaughtered animal. A finishing touch is needed to complete the art piece we have created. Something green for the top like a few fern fronds, voila! I must say it doesn’t look that bad, but do we dare serve this dessert?

Serve it we did! Even before we finished our salmon entree Dr. Smith had the cake out ready to cut pieces for all of us, making sure the icing filled any obvious holes on the plate. The guests went on and on about how moist the cake was – maybe Anne left some slobbers? When I left the party there was only a sliver left on the platter. No one breathed a word about a cake-eating cocker spaniel named Anne Banane. Who knew? Only the three of us, and the dogs at TBTB - and they aren’t talkin’! Mum was the word.

Sweet-Tooth Anne is now out of the doghouse and I’m wondering when she will strike again - leaping tall tables in a single bound, or bouncing like a ping-pong ball looking for something to grab off the counter and run. She’s an opportunist and when the situation is right for snagging food, she is all over it. It’s the smell of something cooking in the kitchen that drives her. But who can stay mad at a face that looks like this? Anne Banane you are both exasperating and hilarious! 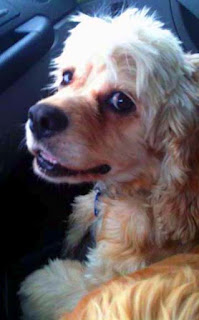 Hitchin’ a Ride on Easy Street

Zippity DoDog is a riot. The girl has never known a stranger and is loved by many. A hound dog with a sense of humor that can sometimes be exasperating – well, it doesn’t get much better than that. So today . . .

I drive seven dogs to a dirt road called Easy Street where there are only a few houses, little traffic and lots of open space. The intent is to have a long hike to wear them out because a tired dog is a good dog. We cram ourselves into a white VW Beetle called VeVe. The group includes Forty West and Lady, the Labs; Bear and Mikke, the Old English Sheeps; RockDog, and BunBun Roush, the Spaniels; and DoDog. The car is rockin’ to and fro with excitement on our short ride to Easy Street. I finally stop, sling open my door as they fly over my lap into the open space. It’s always a race to see who can get out of VeVe first.

The dogs walk, run, sniff butts, hike legs, and chase each other through the trees, into the bushes and over the hill. By Homer standards it’s a really warm day so they find a muddy stream right away to drink and get their paws wet. The labs lay down in the mud to cool their bellies. After a mile or so they all begin to slow down so we turn around and head back to the car. Zippy has chased Forty and she has chased Lady using mucho energy. When she runs she also barks with that deep hound dog voice. Her stubby little legs are low to the ground so she has to run twice as hard just to keep up. On the way back she is draggin’ her ass way behind the rest of us, doing the DoDog shuffle as she pretends to sniff the ground but we all know she is merely taking a breather.

Halfway back I turn around and see three cars coming toward us, slowing down because of all the dogs, finally coming to a complete stop in the middle of the road. I yell to the drivers: “keep moving, they will get out of your way,” as I continue walking and calling the dogs toward me. I round a corner and they all come running except for Zippy. Did I mention how stubborn she can be about doing what she wants, when she wants to do it?

The rest of us wait on the side of the road to let the cars pass. The first two are loaded with people ooohhing and aaaahing about the dogs. “Are all these YOUR dogs,” and “Boy, do you have YOUR hands full,” were some of the comments made as they passed us at a snail’s pace. Where is the third car I wonder, as we stand waiting in the sun? I finally see it rounding the bend with what looks like, oh but it is, a Basset Hound in the driver’s seat! What the hell?

As the car approaches, we see Zippy on the lap of a small woman, looking over the steering wheel and I swear she is smiling. They totally pass us by before the car stops and the door opens. DoDog jumps down and runs over to the pack with a smirk on her face, seriously. I figure she took at least a half-mile off her walk by getting in that car. The driver was apparently in awe. I apologize for the inconvenience but there was no need. The woman drove off laughing, waving at Zippy oblivious to the rest of us.

We make it back to VeVe and all is quiet on the ride home. The dogs crawl slowly out of the car and onto the deck for a drink of water out of the swimming pool, and a nap in the sun. DoDog is totally spent. She sleeps the longest and snores the loudest twitching her legs ever so often. I wonder if she is dreaming of chasing labs through the bushes, or if hitchin’ a ride on Easy Street just wore her out? I can’t imagine how she got the lady to stop her car and open the door? Most likely she stood in the middle of the road refusing to move. That would be just like a DoDog.