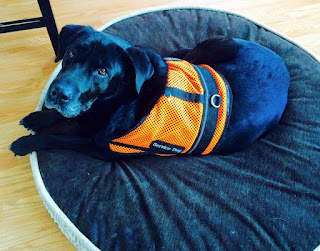 Several months ago, Tails-By-The-Bay (TBTB) Dog Camp received a call from the local hospital with a request to pick-up a service dog from a veteran that was being transferred to Anchorage for medical care. We arrived at the emergency area where a senior black lab called Jackie was waiting. Unsure as to what was happening to her human, she was obviously worried. However, she reluctantly walked with us to the car and gracefully got in the front seat. Jackie was with us for a few days until her human was able to complete the necessary paperwork authorizing his service dog to be with him while he stayed in an Anchorage treatment facility for a month. TBTB arranged a ride for Jackie where she was reunited with a happy veteran as she swished her tail to and fro. Their connection was strong, and her responsibility for him was obvious. They were happiest together.

Over the next few weeks, he was in and out of treatment and Jackie spent time at TBTB during the transitions of getting the necessary clearance for her to accompany him to various facilities. She was a docile, sweet girl that integrated well into dog camp. Her arthritis often bothered her and we would let her make the choice to go on hikes with the pack, or stay home. Some mornings she would run and prance like a puppy racing over the hill to the field for a romp and a sniff. Other days she would go out, do her business and wait at the gate to come back inside. The choice was always hers. She was a polite, gentle soul, and easy to love. We were quickly enamored with Jackie, and loved having her sweet, calming spirt in camp. Recently she stayed with us for a little over a week. When her human came to get her, they were ecstatic to see each other as always. Jackie said goodbye to her pals with a wag of her tail. Her bright eyes spoke a silent thank you to all of us.

We were surprised when we got a phone call a few days later from her human. He was distraught, Jackie had collapsed and was unable to get up. He tied a towel around her 80-pound body and was trying to help her walk. But all she wanted to do was lie down. She desperately needed to see a doctor, but he was destitute without any money, and the clinic required payment up front.  He was frantically worried, and wondered what he could do for his best friend. TBTB Dog Camp called the local vet clinic and persuaded them to see Jackie as a donation to a veteran.

After the appointment an emotional veteran called TBTB with the dreaded news. He was so choked up that it was difficult to understand him. But, by withdrawing some fluid from her abdomen, the veterinarian determined that Jackie had a rupture and was bleeding internally. There was nothing they could do for her. If she was a younger girl (she is 12), surgery might have been an option but it would cost at least $2,500. They thought she had 3-5 days at most to live, and advised him to euthanize her to save her from suffering through the inevitable.

He took her back to their room, a place that had been offered to him by a local pastor. He wanted to spend one more night with her. The previous night was spent lying on the floor next to her, and this night would be the same. One of his concerns was where to bury her, as he was currently homeless. We suggested that she be laid to rest here at TBTB Dog Camp, a place she loved. We would be honored to have her resting on the property. After much contemplation, he made the appointment to have her euthanized the following morning at 11 a.m. TBTB could not be there, as they were transporting dogs for water therapy 75 miles north. They were connected via text.

His text said this was the hardest decision of his life, that she still had bright eyes and lots of life in them. TBTB could feel his pain, and suggested he talk to Jackie, tell her how he was feeling and ask her for a sign to let him know what she wanted him to do. We also said it was important to tell her it’s okay to leave him, that he would be okay. Sometimes dogs hang on and suffer longer than they need to for us, their human. We prayed for peace and comfort for the both of them, and felt their sadness on our ride north.

Thirty minutes before the scheduled appointment to put her down, we received a text from him that said she had gotten up and taken a few steps on her own. It had been two days since she had walked on her own. She proceeded to take a few more steps and squatted down to pee, without collapsing. He was amazed, and called the vet right away. The vet said to postpone the appointment, that she obviously wasn’t ready to leave him just yet.

It has now been a week and Jackie is getting stronger each day. The veteran told us that he is not under any illusion, that he knows she could relapse anytime and that would be it. But for now, they are enjoying each other’s company and taking it one day at a time. He feels the bleeding has somehow stopped for now, and it’s a miracle. His mother and family had prayed for Jackie throughout the night. The power of prayer is truly amazing.

This was such a beautiful ending, and illustrates the strength of the human/canine connection. TBTB is invited to visit with Jackie this weekend, and we cannot wait to give her a hug. She is an amazing girl, a true service dog and we are so happy to know her, and tell her story. We love you Jackie Girl, you are truly a gift.
Posted by K at 9:34 PM 1 comment: