Baking, baking, baking. Healthy treats for my canine friends such as Energy Barks with Granola and Molasses, Puppy Dog Eyes with Carob and Peanut Butter, and Liver Bites with – Liver! It has been quite a process, especially the Liver Bites. Once they are baked on a cookie sheet they must be cut while hot and then dried in the oven for another few hours on low temperature – to make them crunchy.

Everyone is exhausted from watching me – complaining that begging is hard work. I have shared with them no matter what they say. Now it’s late, I’m hungry and it is time to take Zippy out for her final pee of the night. Being on permanent restriction requires a leash. We are quick about it but apparently, not quick enough. When I return I see Anne in her crate with just her butt sticking out, and RockDog right on her tail growling and trying to shove his way into her space. “Anne, did you get my food?” I said aloud as I search and see my sandwich still on the counter. Good thing, I haven’t eaten all day. 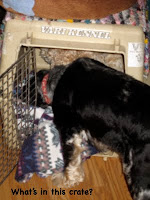 I can tell something is up by the way these two chowhounds are acting. I reach in the crate and grab Anne’s collar to back her out, as she growls and struggles to stay inside. I also pull RockDog back because he is very anxious to get into the crate if he can only push her out of the way. Finally I shove them both aside to investigate and that is when I see it, the remains of one of the cute little paw print bags used to package the treats. The torn bag has gaping holes all over and only a few crumbs left inside. Obviously we are back to the jump and grab routine. Just when I think Anne is trained to not do it, she strikes again. In two minutes flat she leaped up to the counter, snatched a bag on her way down, took it to her crate (but not without RockDog noticing) and consumed part of the bag and most of the liver bites before I knew it. Of course she went for the Liver, the most expensive treat. She is definitely no dummy. 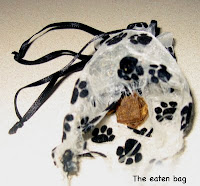 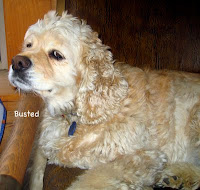 Anne is now a snoring dog, right beside RockDog who essentially ratted her out with his over-the-top behavior about food. Had he not been so persistent to get in the crate with her, I doubt I would have noticed one small bag of missing Liver Bites. As it were, she got busted. But the smirk on her sated face told me it was well worth it. And I have no doubt she will do it again in a heartbeat, first chance she gets. Anne is an opportunist at heart.