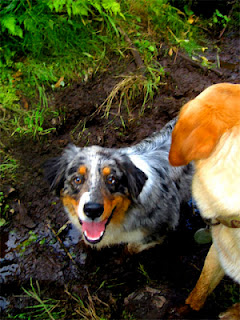 Beau Beau is an Australian Shepherd that was in obedience class with RockDog, making him about 2-1/2. He loves to come to dog camp to wrestle and run with the dogs. I was recently a guest speaker at the Rotary Club luncheon and the subject was TBTB Dog Camp. One of the members asked if I could think of a funny story that happened at camp. Not one but two tales came to mind and both involved the Beau!

After spending the weekend Beau was picked up by the owner’s son before she returned home. A couple days later Maria stopped by to pay for his stay and of course an excited Beau was with her. She gave me a check and they left, all the while he’s looking over his shoulder wondering why he’s leaving? A few minutes later Woody was at the back door asking to go out, and there on the deck stood Beau Beau as Maria’s car was pulling back in the driveway. He had jumped out the window and ran back. That’s understandable because he’s just confused. In the past when he comes with her in the car he stays – he couldn’t understand why he was not staying today. Back to the car, she rolled the window up so he could not jump out again. As they drove off I could hear Beau howling his discontentment all the way up the street. He managed to get his snout out the window and was telling the world he was not happy about it.

Recently Beau was at camp and we had a ball day over the hill. I made a video for my Facebook page of the dogs chasing each other in hot pursuit of the green tennis ball - barking and dancing all the way down and back. The day after he went home Maria saw my post and played the video. Beau immediately tuned in pacing and whining at her door. He got so excited that she sent me an email that he may show up over here first chance he gets. Sure enough, before I even read her email Beau was back. And, he was extremely sneaky about it.

I was at the top of the hill playing fetch with eight energetic canines throwing the ball as far as I could into the bushes below. Somehow Beau got over that hill unnoticed and came back up with the pack of dogs. It took me a minute to realize something was wrong with this picture. There was one too many smilin’ dogs in the mix – and the extra face belonged to a dog named Beau! He looked at me wagging his whole body, pleading please, please, please – can I play? After hearing the dogs barking on the computer he felt sure he was missing something – and he was! More ball chasing than you can imagine.

Beau is like a Boomerang for a few days after leaving dog camp – he just keeps coming back. Maria has the job of distracting him so that he forgets about us for a while. Playing a video just brought it all back to him and he couldn’t stand it – he had to get back in the action, Pronto! After all it’s only a mile run up the hill and that’s nothing for a herding dog like Beau. And what can I possibly do? He’s so darn cute and loves camp so much. I just put him in the VW, take him home, give him a hug and tell him: "until next time buddy, you will soon be back for another stay at TBTB."