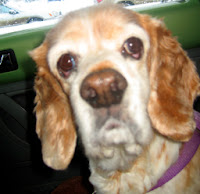 One of the huge drawbacks to living in Homer is the lack of fresh fruit and produce eight months out of the year. Early fall is apple season so the chance of getting a decent one is good right now. The rest of the year the apples are flavorless and mealy because of course they are coming out of cold storage where they have been for years. Well okay, that might be a slight exaggeration but they are crap most of the time. I refuse to get conditioned to buy them anyway, so apples are a rarity for me. The Honey Crisps were big and luscious at Safeway today, plus they were on sale for $3.49/lb. Because they were ‘on sale’ that sticker price did not register as to just how absurd it really was. I grabbed two of those babies on my way through the produce section. Imagine my surprise when I checked out - $6.18. I was aghast! “$6.18 for TWO applies?” The clerk replied, “Well, they are on sale.”

Holy Shit! They would have been over $7 at regular price, and they are not even organic. Based on their abnormal size, the apples must be genetically modified (new buzz term). The corporate bastards are making tons of money for something not even good for me and that pisses me off. I picked apples as a kid in West Virginia and they were never this big - almost a pound each. And, the price is ridiculous even by Homer standards. Supply and demand theory dictates, and we are easily ripped-off here because we have no choice other than to drive 75 miles north, to Soldotna. After this purchase, it was time for a road trip in Sooby, our new/old 1995 Subaru. 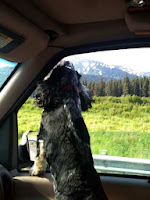 The next day still seething over being held hostage by big, fat, gorgeous apples (and they were delicious) I loaded up five dogs and we were off in search of better prices. Just to clarify, I am not a coupon shopper by any means but I do resent being blatantly screwed. The leaves were in full color and the sound of snoring dogs inside Sooby created a peaceful, beautiful drive north. We arrived at our destination where I shopped, filling my cart with sale items that included apples @$2.49/lb.  (a mere $1.00/lb. savings).  While loading the car with groceries the dogs only raised their heads long enough to see if I was offering treats. Satisfied that I was not, they went straight back to sleep. We were on the road home in just under an hour and $100 lighter. The money saved on food prices, more than made up for the gas used to get there. 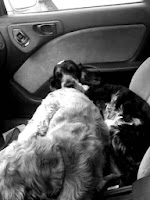 It was important to be home by 5:30 as Forty West was being picked up from doggie day care. We had plenty of time to make the deadline so there was no need to rush. All dogs were happy to settle in for the ride home without a potty break. After about 30 miles, Woody began his demand barking signaling to me that he could not wait - he had to pee now. I passed a couple of rest stops but thankfully kept going. Finally we reached Nilnilchik, a small village with a couple bars, a pizza joint, a coffee shop, a gas station, and not much else. Still forty miles to Homer town, I was hoping Woody would go back to sleep but the tone of his bark changed and I knew it was time to stop, he could not wait. 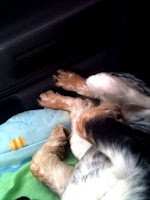 I pulled off the road into a large parking lot with a rundown bar sitting about 100 yards back off the road. It was now drizzling rain and the wind had picked up. I told the other four dogs to stay put (one look outside and they weren’t getting up anyhow), and we would be right back. I left the car running, quickly hopped out, fastened his leash and let WoodBoy out to take a much-needed whiz. He barely cleared the car before assuming the position. We then rushed back to Sooby anxious to get out of the rain, only to find my door locked. WTF. I then tried the back door, locked; the other two doors on the passenger side, plus the back hatch - all locked. It slowly dawned on me that I had locked the keys in the car, it was running and four dogs were watching me from inside. SHIT! How the hell did this happen? Only one answer made sense, the car automatically locked because it was running? OMG, the rain is now coming down hard, we are cold and have no idea what to do. The only two obvious choices are: go to the bar and ask for help, or break a window. How in the hell can I do that with four dogs on the other side, I wonder? So we hiked toward the sign that read Inlet View bar. I literally had to pull on Woody to get him moving because he wanted to smell everything along the way, and pee some more, oblivious to the rain that was soaking my sweatshirt. Did I mention my down vest was in the car, along with my purse, the cell phone and the rest of my life? 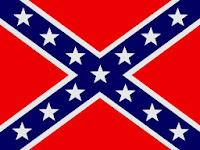 I opened the heavy bar door to find a small, empty convenient store on the left, and a bar to the right with three people, two customers and a bartender. The smell of greasy fries and cigarette smoke filled my nostrils and was instantly absorbed into my wet hoodie. WoodBoy raised his nose to sniff the air hoping for a snack. He might be deaf and almost blind, but there is nothing wrong with his nose. A rebel flag hung on the wall behind the bar, along with a sign that read: ‘what part of redneck don’t you understand?” Two middle-aged men sat hunched over their mixed drinks not about to let go of them, much less get up.  I explained my problem and they just nodded, without comment. I then mentioned that I would just break the window (hoping one of them would volunteer to help me do just that). Instead, a guy called Bubba advised me not to do that because it would be expensive to replace. The other guy just sat with his back to me, never once turning around. It was apparent there was not going to be any help here, these were just warm bodies occupying barstools. The bartender volunteered to ask the cook if he had any ideas, about the same time another woman came from the convenient store, sporting an air of authority.

Enough said, who was I to argue? My life was inside the car. No money, no phone – what’s a girl and her dog to do, except leave? We began walking back to the car, Woody again smelling every bush along the way. The people aren’t particularly friendly at the Inlet View Bar. As I thought more about the situation it finally dawned on me as to why that might be. It had to be my Salty Dawg sweatshirt symbolizing liberal Homer town. Probably not the best thing to wear in a redneck bar – you think? 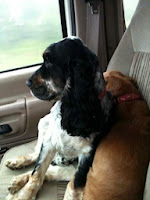 The windows of Sooby were filled with sweet faces and wagging tails. If only I had trained RockDog to hit the lock button on command. . . Why can’t I be more like my dogs and just relax, I wonder. This too will pass. The good news, had I pulled over at a rest stop before getting to this village, there would be no one around! Yikes! All the tourists have gone home so it can get pretty desolate along the road. I’m working on finding the positive here, but the clock is ticking and I have no way to contact Forty’s mom because as you know, the cell phone is locked up. I have to break a window but then the question becomes, which one? The bar door opens and Bubba comes out, getting into his car and driving off without giving me a second glance. Whatever, Asshole!

Back to the situation at hand. . . not the drivers side, not the passenger window, and not the boot because then how would I reach the door lock? Maybe one of the windows on the side, but I need to find a big rock to do the job. During this process the bartender opens the door and yells something out at me. I have to move closer to hear her, again dragging Woody away from smelling another bush: “the gas station can open your car door but they want $45.” OMG, music to my ears! The gas station of course, why didn’t I think of that? “That’s fine, have them come.” Obviously $45 is way cheaper than any window I might break.

We wait another 15 minutes in the rain and see a truck pull up in front of the bar. A guy gets out and retrieves something from the back bed, and I know he must be our man. I start waving my hands, “Over here, Hello! Over here!” Ecstatic, I’m almost jumping up and down and of course all the dogs are now barking! He gets back in his truck and races over to us. After assuring him all the dogs inside the car are really friendly, he goes to work and has the back window rolled down in less than five minutes. Apparently it was easier to push the automatic window button than to flip the lock with his Slim Jim. The open window is on Forty’s side of the car and with the wind now in his face he just sits there looking at us, not one bit interested in getting out of the warm car. 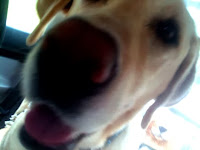 OMG we are finally back in Sooby and the dogs greet me like I have been gone for hours. In total it was about 45 minutes. I wrote the guy a check  (after first convincing him that it was a good one), and we were once again cruising the road back to Homer town. I should have tipped the bartender, but I was so excited to get the hell out of there that I forgot. Next time through I will stop and if she’s there, say thanks and give her $10. We pulled into our driveway a little late but still five minutes before Forty’s mom arrived to pick him up! He definitely had a story, if only he could talk.

This too did pass, but not without leaving behind a navy blue Salty Dawg sweatshirt that reeked of cigarette smoke, greasy food and a liberal attitude, not necessarily in that order. Not to mention the inspiration for a story.