In the beginning of the year decisions are made to change behaviors. This effort normally lasts a couple of months if I am lucky, and usually involves food, drink and exercise - totally exhausted subjects for change.

For the past few years I have flirted with the idea of becoming a vegan. No meat, cheese or dairy products. That would mean using my creativity to make plant-based gourmet dishes that are so succulent that I won’t miss what I’m not eating. This is in direct contrast with the philosophy that deprivation never works. It merely makes you want whatever you don’t have, even more.  In the meantime I experiment with various vegan products so if I do decide on a permanent change, I will know what’s out there. 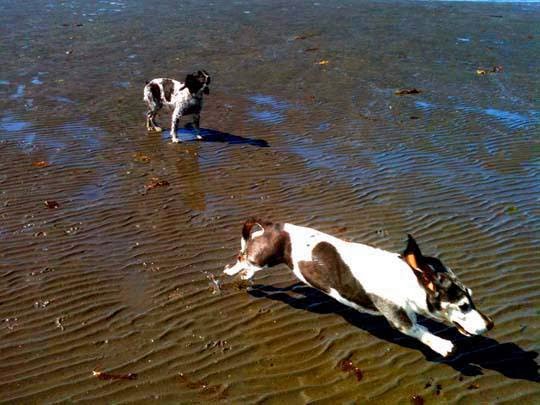 After a dog walk with nine exuberant canines, all but two come back to the house for a nap while RockDog, Bunny and I go to the grocery store for dog kibble. As I pass by the cooler I notice a pack of vegan hotdogs and think a bun-less dog with mustard and a salad sounds pretty good. Recently I bought a variety pack of mustards made in France and the basil one might be good at disguising a meatless dog. When you are hungry anything sounds good. 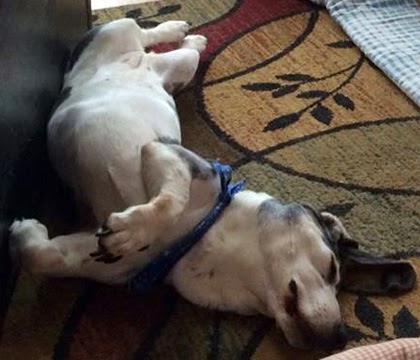 We are greeted at the door by seven barking dogs just waking up. It’s chaos at the gate as I come in with a bag of groceries, and a few dogs go out. The hatch on Sooby is left open because I am coming right back. Of course someone had piddled on the floor so I am temporarily distracted while wiping it up and then mopping the area – 5 minutes max. I then get the remaining bags out of the car and notice DoDog rushing up the driveway with her head down. She must really have to go potty, a bit odd since we just had a long walk. I unpack everything putting stuff in the refrigerator and cabinets.

Wheew, I am finally ready to fix my lunch. Wait a minute; I don’t remember putting the vegan dogs away?? I search in the bags to be sure I got everything out.  Maybe I subconsciously put them in the fridge, or the cupboards? Finally, I return to Sooby to see if the dogs fell out of the bag. I did buy them, didn't I? Could they have fallen out of the cart? Were they listed on the item printout I tossed in the trash on my way out?

Wait a minute! Didn’t I just see a lone Basset Hound quickly walking away when I returned to the car? Could she? Would she? Did she? The light bulb finally goes off. Of course she did! All the dogs are off the deck and anxious to get to a spot in the bushes where DoDog is hanging out nonchalantly looking my way. The other dogs have confirmed my suspicions with their relentless sniffing of said area.  I’m not about to walk over the hill on the ice to investigate the spot in question because I already know there is nothing left.

And now for the rub, I know she snagged them out of the bag while I was cleaning up dog pee, she knows she did it and has a sated smile on her lips, and the dogs know she did it because they can smell the residue of hotdogs on the earth where she opened the bag and no doubt consumed all eight dogs along with the plastic evidence. But, I can’t accuse her of such a heinous crime when I have no real evidence that she did it!

I wonder what does a Vegan Dog taste like? I have yet to know, but out of nine canines I bet eight know what one smells like and the other one knows they are truly delicious. But she has an indiscriminate pallet. Grrrrr! This human should know by now to never, ever leave tempting food anywhere near opportunists, even for a few minutes. Bottom line, the hotdogs are history and I must now find something else for lunch. Sigh. . .

Isn’t this just like a DoDog becoming a Vegan? NOT!

Who Let the Dogs Out? 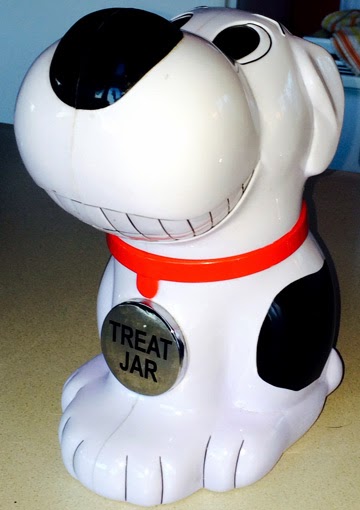 A beautiful warm winter day in Homer, Alaska at 43 degrees on February 5th! Unbelievable.  The dogs are begging for a walk but the driveway and street in front of the house are extremely icy. I have busted my ass twice in the last two weeks so that is not an option.

Instead I load 7 dogs in Sooby the dog wagon, driving one street over to Easy Street. The car is rocking to and fro with Forty, the Yellow Lab, Lexie, the 130-lb. Mastiff, a Petit Griffon called Emily Pearce, RockDog, Bunny, Anne, and last but definitely not least, DoDog. They are over the top excited and can hardly wait to get out of the car. We are parked on a vacant six-acre lot that belongs to a friend and are ready to hit the dirt road that has limited traffic and no ice. I can’t get the doors open fast enough. RockDog and Bunny scamper over my lap as I get out to open the back hatch, and the rest of the dogs roll out onto the ground jumping, whining and barking their freedom cheers.

As quickly as we are out, DoDog and Anne take off in the opposite direction. Hey wait, you guys! I call them but they ignore me as the other five follow me onto the road headed north. I call and call these girls to no avail. Fine, go where you must. I will leave both your asses home next time. The rest of us are going on a walk! Grrrr! They are so frustrating!

The other five dogs walk, sniff, chase, bark, kick up their heels and have a marvelous time in the sun. Occasionally I look behind to see if the two renegades are coming. I complain to the other dogs that we are definitely leaving these two at the house next time. Even though the walk is perfect for this sunny day, I can’t help but be concerned about the missing twosome. We have walked about a mile when I finally see the DoDog running at top speed to catch up with us. Her short legs are kicking up dust all around so it appears to be a blur coming toward us except for an occasional glimpse of black and white fur. I don’t worry much about her because she will eventually find us with her hound dog nose. But Banane, well that’s another story. She only obeys when there is a treat involved, in other words she wants to be paid. Otherwise she marches to her own drum and thinks about it later, when she is lost.

We cut the walk short and head back in the direction of the car hoping to find Anne waiting for us there. NOT, she is nowhere to be found. The other dogs load up and I realize that DoDog has once again disappeared. WTF? Maybe she is looking for Anne? This is exasperating. The other well-behaved dogs are hot and need a drink of water. I cruise the lot where I last saw Anne with the windows down, calling her name and offering a treat. Nothing. . . And no DoDog either! I decide to drive the others home for a drink of water and a much needed nap. As I pull out I see DoDog in the middle of the road waiting to be picked up. No Anne. We arrive back to the house and I call the vet clinic to advise them that Anne is missing in case anyone calls to report a blonde cocker spaniel on the loose. I take RockDog and Bunny with me back to the property and then I realize, DUH. I need the treat jar, a large black and white dog. When his head is lifted the sound of “Who Let the Dogs Out” rings out and if you shut and reopen it, ”You Ain’t Nothing But a Hound Dog” plays. Anne is trained to this sound and no matter where she is in the neighborhood she comes running when she hears it, a true chowhound. After going back to retrieve the treat jar, I drive approximately three miles out Easy Street, windows down, dogs barking while I continue to lift the head of the jar to play her favorite songs.  Nothing . . . Where could she be?

We return to the place where Sooby was originally parked and drive the complete circle, again letting the treat jar sing out the windows. Finally, I spot her inquisitive little face looking at us from the bushes. She is sitting with her blue scarf askew and ears perked. “Anne, where have you been?” I say as I once again lift the head of the jar. And, that’s all it took for her to come running toward the car. She had obviously been there in the bushes all along, smelling and scavenging to her heart’s content – not even 5 feet from where the car was parked. And she had no doubt heard me calling for her and totally ignored me. The treat jar did the trick. She is now safe in the car enjoying her payment of a delicious Yummy Chummy.

On the short ride home I called the vet clinic to let them know she was safe. “You want to know how I found her?” I asked Sue, as I raised the dog’s head and “Who Let the Dogs Out” rang out.

“It’s a treat jar," I explained as “You Ain’t Nothing But a Hound dog” played in the background.

She laughed, “You’re dogs aren’t food motivated, are they?” 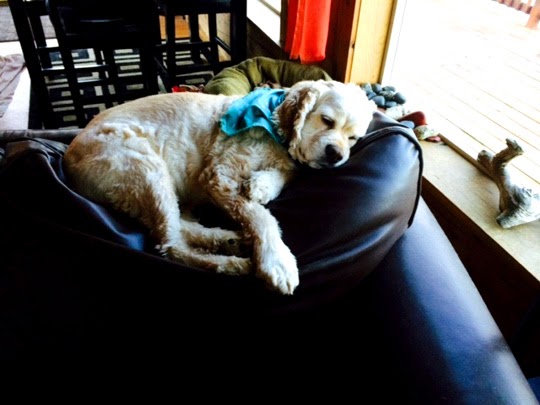 Anne Banane is now sound to sleep, snoring on the back of the couch as I write this post. Being in the bushes for an hour and then having to eat some treats to make up for it, is exhausting. She is such a frustrating yet adorable little rascal, who can be mad at her? Not me! She’s a writing inspiration!