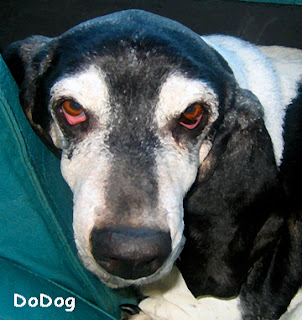 Zippety DoDah was rescued from a farmer’s market in Girdwood, Alaska in 2004. I was driving home from Anchorage when my beloved VW called VeVe insisted on turning off at the Girdwood exit. I had no control, VeVe merely turned toward the mountain. The farmer’s market was closing as we pulled up but I decided to take the three spaniels for a quick walk about since we were already there. We immediately noticed a little Basset Hound with mournful eyes tied to a tree behind one of the booths. “What a beautiful dog,” I commented to the vendor. “She’s free if you want her,” was her reply.

“FREE?” Apparently Zippy was causing two elderly cats a problem so it was determined that she had to go. She was passed on to this vendor to find her a home at the market that day and if not, she was headed to the local shelter.

“Sorry” I said, “but I already have three dogs and getting another one is out of the question.” Zippy had picked up her toy and dropped it directly in front of OgDog, my pack leader just as I finished my sentence. We walked back to VeVe, I put the dogs in the car and automatically looked back over my shoulder. Zippy sat looking at us with the saddest look ever – Bassets are good at this. That’s all it took. I immediately turned around, walked back to the booth and said, “We’ll take her” and placed her in the back of the VW with the others. And that’s how it came to be that my spaniel pack adopted a Basset Hound. Apparently exhausted from a long day at the market, Zippy slept the entire drive home.

DoDog has proved to be the most stubborn, exasperating, endearing, and funny character in the pack. A friend once described her as a dog “marching to her own drum,” an accurate description. She has brought people together from near and far, is the mascot in a neighborhood where she is mostly adored - well except for her occasional trash rooting expeditions that her nose cannot resist, and her habit of eating frozen poopsicles in the winter. We are all grossed out with this one, but she loves it!

Zippy has never known a stranger, will get in the car with anyone, loves the sun in Mexico and is scared to death of cats. I had a client drop off his dog one day and while driving away he nearly had a heart attack when DoDog put her head on his shoulder from behind. She had crawled in the backseat of his car when no one was looking to go for a ride. Another time she saw an opportunity to run in the neighbor’s house to find the dog food bowl when she came face-to-face with Charlie, the cat. He merely backed her in a corner in the bathroom and without even touching her you could hear her howls and moans throughout the neighborhood. I thought she was in real trouble but Charlie merely had her cornered and was pacing back in forth in front of her nose and she was doing what she knows best, howling like only hound dogs can do. 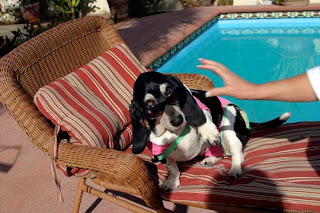 She has slept in various beds in the neighborhood, swiped dog kibble in available bowls, grabbed steaks out of grocery bags, eaten a bottle of Vitamin C’s causing her to puke and poop bright yellow for days, and generally  been a pain in the butt, albeit an adorable one. The DoDog tales are endless - living with her I usually have a good story at least once a week. One day she will have a children’s book written in her honor.

Yesterday I saw her meandering her way up to the house across the street and noticed two cars in the driveway. The house is for sale so the neighbors have been leaving while potential buyers have a look. I took a leash and walked up the driveway asking a man and woman if they had seen a Basset Hound. They said yes, they thought she lived there! She had walked right into the empty house and proceeded to go through every room with them. She was merely showing them around since she is familiar with this particular house because. . . 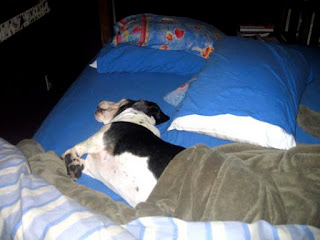 One summer day she went to visit and found the house empty but the sliding glass door was slightly cracked open. She proceeded to push it open and go to the master bedroom where she climbed into bed and under the covers for a nap. For hours we were looking everywhere for her! When the neighbors got home they thought their cat was in the bed until DoDog crawled out and walked to the door to be let outside! She had not touched a thing in the house, just needed a nap. . .

I assured the couple she did not live there but she was the welcoming committee in the neighborhood. I put a leash on her and walked her back to our house where she crashed for a nap in the sun. Being the social butterfly on Katie Jean Circle can be exhausting!

In 2004 she was called Zippety DoDah and over the years we have given her many other pet names (no pun intended). My three-year old grandson insisted on calling her Zippety DoDog which we shortened to just DoDog, ZipDog, Zippy, Doodle Bug, and when I’m mad at her at least once a day? Well, I won’t mention those names. . .