Today is the 7th anniversary of my first true heart dog crossing the Rainbow Bridge. We were so connected and shared many adventures in his 16-1/2 years by my side. In honor of my special boy, I am posting a story written about him as a puppy. . . 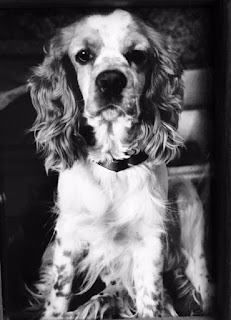 I have always had a companion dog, in particular cocker spaniels. As long as I can remember there has been a spaniel in my life. When I was 7 my grandmother gave me Candy, who I eventually had to leave behind when we moved to Chicago. It broke my heart. During my years as a single parent, I had little time to devote to a dog but they were still around. My boys grew up with spaniels.

I adopted Roxanna Danna in 1988 when she was two years old. I responded to an ad in the newspaper, brought her home for a weekend visit and she never left. She lived to be 14. At the time our neighbor had a beautiful tricolor spaniel with a terrific disposition. We decided to breed our dogs with the intent of having wonderful pets to share with other cocker lovers. I was committed in advance to adopting out the puppies since I knew I could not keep them all. However, in order to adopt one of our pups applicants were screened with the same intensity one might expect when adopting a child. I had to know they were going to safe, responsible and loving homes.

Roxanna had three beautiful, healthy litters and up to this point I had resisted keeping a pup. She had her last litter in 1993 at the age of 7. It was a difficult birth that ended in an emergency cesarean. I brought her home from Pet Emergency with six wet puppies. Roxanna was unconscious so my son Chad and I spent the next 24-hours keeping the puppies warm, and encouraging them to eat by placing her nipple in their mouth.

As the puppies approached 8-weeks old, five were spoken for and we had only one male left. This particular pup was the first one to escape the whelping box. Like Houdini, no matter what kind of barricade I made he found a way around it. Each morning he was out of the box and across the room, fast asleep on his own. He didn’t seem to need the comfort of the pack. He was extremely independent and both Chad and I were a little taken by him. I was drawn to his independent spirit.

Chad began an ongoing campaign to keep this pup. We were in the process of moving out of Alaska with three dogs, so a puppy was entirely out of the question. However, Chad continuously found fault with potential adopters convincing me to reject them. As it got closer to the time we were to leave, Chad had convinced me that this pup would be his. He promised to take full responsibility and take him to college the following year. I’m not sure how convinced I was of that one, but I did finally agree that the pup would stay and travel with me in the car across country, while Chad flew on ahead.

Just before leaving Alaska I was at a going away party when an eighteen-month old baby ran toward the pup pointing and saying “oggie, oggie.” And that is how he officially became Oggie, aka the OgDog, Oggie Doggie, Ogster, Ogsey, Og and lots of other pet names, no pun intended. Once he had a real name my relationship with him began. He would be the cocker like no other and we would become the best of friends. But now I’m getting ahead of the story.

I drove the 4,600 miles to our new home with Oggie on my lap. By the time we reached our destination we had formed a bond, and Og had become my dog. I would learn the intensity of that bond one winter morning in January 1994 when he was only 8-months old.

We had moved to a country house where dogs could run free when they went outside. On this particular morning I let the dogs out as usual not realizing there was a blizzard in process and it was near whiteout conditions. I put the coffee on and went back to the door to let them back in the house. My two older spaniels came in, but Oggie and our black lab, Toby were still out. It was only when I went outside that I realized the severity of the storm. The temperature was dropping as the wind picked up and I was only able to stay out a few minutes – and I thought I left winter behind in Alaska! After becoming increasingly concerned, I got in my Jeep and went looking for them. I drove all the back roads, actually carving them out since no one else was driving. There was no trace of Oggie or Toby.

I returned home and waited, opening the door often to call out to them. After about seven hours, Toby came to the door alone, totally exhausted. What did that mean for the OgDog? I waited throughout the day anxiously watching the back door. That night the temperature dropped to -20 below. I was trying to stay optimistic, but as the hours passed I began to panic. I couldn’t eat, I couldn’t sleep – I had thoughts of Oggie being disoriented and freezing to death. I was overwhelmed with guilt; how could I have been so careless? I refused to turn the porch light off, somehow relating that gesture to giving up hope. Instead I got up every hour of the night to check the sliding glass door.

The next morning after a fitful night, I put on arctic gear and began combing the hillsides around the house. My worst fear was that the sun would come out, melt the snow and I would see his frozen little body in a field. I became obsessed with that thought as I followed tracks in the snow that led me underneath an abandoned trailer. With a flashlight I crawled under the trailer house only to find what appeared to be bloodstains – not a comforting thought. Although the snow had stopped falling, the temperature was still frigid with a chill factor of below zero. After searching for a few hours I returned home and called the neighbors, placed an ad in the newspaper, arranged a radio announcement and waited. I received a few calls but all of them turned out to be dead ends.

My optimism was quickly fading. The OgDog had simply vanished. I refused to come out of my room except to check the back door. My eyes were swollen from crying and lack of sleep. My family was concerned for me. All I had to do was visualize a memory of Oggie and I would cry. Alone in my room I began to paint pictures, strange, angry images.

On the third night of his disappearance I fell into a deep exhausted sleep and had a vivid dream of him, healthy and playing ball. For the first time in days, I felt peaceful. Subconsciously I knew he was missing, but I felt he was okay. I suddenly woke up, confused. The dream had been so intense that I thought it was real, that he was back. I ran downstairs to the back door sure that he would be there. He wasn’t. Was I hallucinating from lack of sleep? As I fell in and out of sleep over the next four days, the dreams continued. I felt a spiritual connection to him, and subconsciously I started believing in the dreams.

On the seventh day of his absence, I woke up feeling much better. The sun was out and the snow was melting. I came out of my room and drove to town to take care of some overdue errands. I had essentially been hibernating for a week. An inner peace had settled over me and I resolved in my mind that my chances of Oggie coming home were slim, but I was aware that he was alive and well even though he was not with me. I no longer feared finding him dead on the hillside and I no longer felt the need to sleep for comfort. The weight of the past week was dissolved. I was going to be okay.

When I got home I went to the art building and began working in my darkroom. Hours later I heard my roommate’s truck pull in the driveway and then heard Jim knock on the door. “Don’t come in, I’m printing.” I said.

“When you get a minute, come to the house. I have someone I want you to meet,” Jim said.

“Okay,” I responded, thinking he had probably brought a friend home from work to cheer me up. I finished the print I was working on, cleaned up the chemicals and headed to the house.

When I walked in the kitchen my two sons and Jim were standing in the dining room smiling. I looked around for the person I was supposed to meet and realized there was no one else there. Confused, I looked at my boys still smiling and suddenly it hit me. “Oggie’s home,” I whispered. At that moment I heard footsteps running down the stairs from my room. As he rounded the kitchen corner, my knees were shaking as I knelt down and he jumped in my arms. It occurred to me that this might be another dream, but he felt very much alive in my arms. My thoughts went from total disbelief to a quiet understanding as I hugged his skinny little body, tears streaming down my cheeks. By not giving up hope, by refusing to let him die in my mind he had somehow been returned to me. I have no words to express what I was feeling. I just know it was a spiritual thing between us and that one day I would write about it. This is my story.

Like me, perhaps you wonder about Oggie’s story. I will tell you what I think based on the few things I know about that week. I know he lost a lot of weight so he had been hungry and scrounging for what food he had. Because of the severe temperatures and the snow depth he certainly had shelter, perhaps in a barn with farm animals. Much later a neighbor told me that one night during the cold spell he had shut a dog in his garage and fed him. Apparently it was dark in the garage so he didn’t get a close look and the next morning when the garage door opened, the dog ran off.

I’m sure you’re also wondering how my roommate found the OgDog? Jim was on his way home from work about ten miles from the house when a dog ran directly in front of his truck. He was traveling at approximately 55 MPH and remembers having to slam on his brakes and swerve to miss the dog. He recalls thinking that it looked as if the dog purposely ran in front of him. When he got out of the truck, he was amazed to see it was Oggie. I still wonder how it happened to be Jim’s truck. Did Oggie somehow know, or was it merely a coincidence? I think he knew.

OgDog slept beside me every night for 16-1/2 years. Little did I know when Chad convinced me to keep him in 1993 that he would become my best friend and we would share so much together. The universe consistently lines up to give us what we need in life. All we have to do is get out of our own way and allow it to happen.