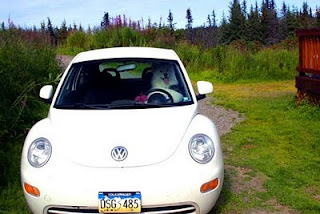 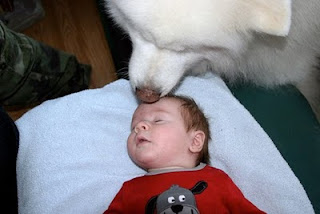 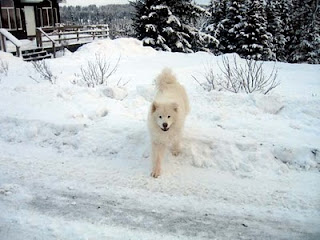 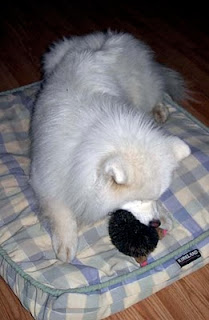 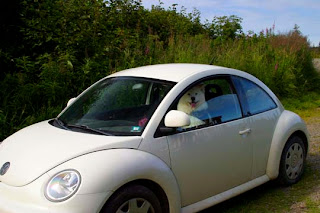 I can’t possibly have a blog without writing about the DuWhite Dawg. DD has been coming to TBTB for five+ years now. He’s a beautiful big Samoyed that resembles a cuddly teddy bear, and he’s sure the world revolves around his needs. He’s a people dog, not a dog’s dog.

DD constantly follows me around hoping for a treat. If I turn around too quickly I bump into him. If I’m in the kitchen he’s by my side, pissing all the other dogs off. There is growling and posturing going on all around him, but he is oblivious to it. Funny his owner used to tell me to keep him on lease outside or he would run off. Ha! John doesn’t tell me that anymore because I couldn’t lose DuWhite if I tried. He is my shadow. And because he has separation anxiety he has to go everywhere I go in the VW. I must admit, he looks really cute in the driver’s seat – he assumes the position every time I get out of the car.

His separation anxiety was noted during his first visit to TBTB Dog Camp. I returned from town in a snow blizzard only to find my sliding glass door wide open and nine visiting dogs in the driveway. OMG! I’m sure he told them he would let them out but they HAD to stay in the yard. The next time I put him in a Great Dane crate only to come home and find him outside again, the door wide open – at least I had the forethought to barricade the other dogs upstairs this time.

Okay, so not only can he open sliding glass doors, he can also unlatch crates. So that being said, the next time I went to town I locked the sliding glass doors and left him in the house. When I returned all the food in the cabinets was pulled out onto the floor PLUS he took a massive dump in the middle of the living room. He was definitely making a statement and I finally got it! After that episode he has been my steady sidekick in VeVe wherever I go. He is fine with that because that’s his routine, he goes in the car with John everywhere.

During his recent visit to TBTB I found myself thinking more like a dog than a human, or in this case thinking more like a DuWhite Dawg – a requirement in staying one step ahead of him. DD just left yesterday after being here for seventeen days. In that time frame he managed to:

Open a fifty-pound bag of dog food in the car – fortunately I caught him before he consumed the entire thing.

Eat an entire bag of Pita bread and most of the plastic bag – in the car.

Open oatmeal and spread it all over the car floor – I’m sure it didn’t taste as good as he expected.

But, the real kicker was when I went to the post office to mail holiday packages to my family. I could only carry 3 of the boxes so had to come back for the other two. In less than 5 minutes, DuWhite dog was well on his way to having a box of homemade Grand Marnier Chocolate Truffles, Pumpkin Bread with Cream Cheese Filling, and a bottle of Kahlua made with grain alcohol, 190 proof! OMG! He had managed to chew through the flat-rate box in no time flat and had gnawed the tin box to the point of a puncture hole. Yikes! A few more minutes and I would have had real problems – a white dog stuffed with chocolate and alcohol! Not a pretty picture.

So now I have to take the box home, assess the damage, repack a NEW box and stand in line at the Post Office again! Grrrrr. Plus I now have to plan my trips to town, getting the groceries last. And, if I go to more than one store for food items, well I have to carry all the groceries into the other store with me, because no matter where I hide food in VeVe, DD will find and eat it in a heartbeat! Sigh. . .

DuWhite Dawg if you weren’t so darn cute, we would have banned you years ago! You make the other dogs seem easy. But, you are such a major character in this screenplay called “Tails of a Dogsitter.” And of course who could resist that adorable Teddy Bear face?
Posted by K at 12:51 PM