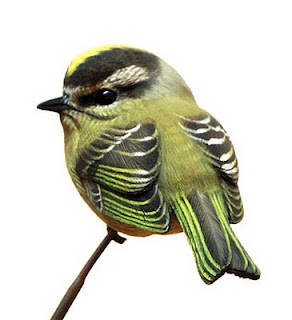 It is truly a beautiful Sunday in Homer town. I had a friend down for the weekend and along with seeing the play at Pier One Theatre “We Won’t Pay, We Won’t Pay,” we had dinner and breakfast out, enjoying a great weekend.

Before she left to drive back to Anchorage we went for a bite to eat and then to the Oyster Farm to buy some fresh Kachemak Bay oysters for her to take back to the city. Judy left for her drive back and I headed up the hill to nine dogs ready for a walk.

As I approached the front door I saw a small bird on the steps. So often birds fly into the large windows in the front of the house, and break their neck in the process. Lying on the step by the sliding glass door was a lovely little Gold Crown Kinglet. He had obviously hit the glass and was struggling to breathe. I picked him up and saw that one of his eyes was really alert but the other one was smashed, I assume that’s the side where he hit the glass.

This happened a few years back and I massaged the bird, and then laid him in a safe area so he could regain his strength. I went back to check on him a few hours later, picked him up and he flew out of my hand, well on his way. That was a good feeling. I hate finding the dead ones on my deck. Once I tried to cremate a tiny creature and had an awful time getting it done. I have since taken to placing them carefully in the tall grass and saying a blessing for the life that was lost by my window glass, and the pain and suffering endured. Although I know the critters out there will eventually eat the corpse, I recognize it is part of the food chain and that’s just the way it is.

This little guy, who I named Little Bird, was struggling very hard to sit up. I found a nice spot, got a soft cloth for him to lie on and left him to recover. The spot was high on a ledge so the dogs would not find him when we went walking. A few hours later I was delighted to see that Little Bird was gone from the ledge, thinking he had flown off. It wasn’t until I looked down that I saw him lying on the ground beneath the ledge still struggling. ☹

Once again I put him back on the ledge – this time in a small box. A little while later I checked and he had once again tried to fly and fallen off the ledge. The six-foot fall was not helping his condition at all. I needed another plan.

I decided to put him on the back deck away from the dogs. Twice he got out of his box there and was desperately trying to be on his way but couldn’t quite do it. He was wearing himself out in the process. I know a lot about dogs but absolutely nothing about birds. I was worried that Little Bird was in pain and I had no idea what to do about it. Who could I call on a Sunday afternoon for advice?

I tried Islands and Oceans Visitors Center but was unable to get a human on the phone, and leaving my name and number for a return call on Monday was not an option. I then called Homer Veterinary Clinic and got the number for the weekend Vet. The on-call Vet answered on the fifth ring and I explained the situation to her and asked what I should do. She said I could bring him in the following morning. “But, what about the rest of today and tonight if he is suffering,” I wondered? “Isn’t there anyone else I can call?”

She told me there was a bird rehabilitation woman named Charlotte in Homer and was happy to find her phone number for me. I got Charlotte on the line just as she was leaving for her shift at the Lynx Golf Course. She told me to bring Little Bird to her there. Deal, I arranged to meet her at the golf course in an hour. I got Little Bird ready for the trip by placing him in a deeper box with some fleece lining.

Little Bird seemed to be getting stronger as the day progressed but he still couldn’t fly even though both his wings were flapping. On the drive to the golf course I had a difficult time keeping him in the box because he was determined to escape. Hang in there little buddy; we’re going to get you some help!

Finally we arrived in the parking lot at the Golf Course and Charlotte was there to meet us. We took Little Bird inside so she could examine him. She thought perhaps he was still stunned a bit. But, because his legs were hanging and not engaging in his efforts, she said he also might have a neurological injury. She told me not to worry; she had rehabilitated birds in much worse shape than Little Bird. She explained that he is a migratory bird and if his injuries require a few weeks of healing, he would have to stay with her for the winter. But, if he’s up and flying in the next few days he will be able to make his return trip south to the warm country.

I am confident that he will be nursed back to health in comfort no matter how long it takes. He’s in good hands. I said my goodbye to the sweet little bird and gave Charlotte my phone number. She promised to call and let me know how he was doing. I left knowing Little Bird had a strong fortitude and was not about to give up the fight. Bye, Bye Birdie. Grow strong with time and have a good life. ☺
Posted by K at 12:43 PM