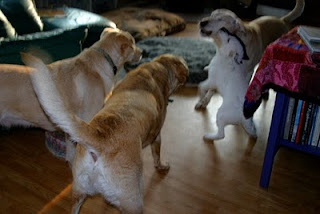 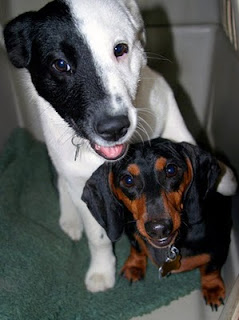 On Friday the big dogs start going home and are replaced with little dogs. TBTB Dog Camp is never predictable. It seems that for the most part medium to large size dogs are the norm. Not so for this weekend.

Mr. Yang is here Monday thru Friday each week and to date has been considered the little guy. However, on Friday he found himself to be the biggest dog around and was not particularly fond of his new position. He enjoys picking on the larger dogs enticing them to wrestle him to the floor and roll him around. He thrives on the interaction. But he ended this week with the teeny, shy, timid dogs who wouldn’t give him the time of day. Poor Yang! He slept most of the day and eventually got Zippy to play with him but it wasn’t the same, he still prefers the larger labs for wrestling.

And so we have: Sammy a Schnauzer mix and Mattie the Shitzu who are locals that have been at TBTB before. Mattie likes to roughhouse with Sammy who runs under the bed to get away when he’s had enough.

Holden is a Las Vegas miniature poodle that decided he didn’t want to eat, drink or pee the entire day but instead preferred to sit on the leather chair and watch the activities from above.

Dixie, an adorable Schnauzer from Nevada also liked being perched high on the table by the Doga book where she could practice her poses. She has a very high-pitched shrill when she gets excited and interacts with the other dogs. Yikes! It’s a good thing her mom warned us of this noise, otherwise we would have rushed her off to the vet thinking she had to be hurt or worse yet, dying!

And then there is LeRoy a local miniature daschund with a big attitude because after all he is the Homer Tribune Mascot! LeRoy likes to hide in the house and makes a game out of not coming when I call him. However, all I have to do is shake the treat bag and he’s there!

TBTB practices Wu Wei, the true way of the dog. Translated, Wu Wei simply means the art of not doing. Dogs are happy to just be. I learn so much by sharing their time and space. It’s uncomplicated and totally in the moment. There is never a dull moment at TBTB, no matter what dogs are at in Camp it’s always a howling good time!
Posted by K at 8:40 AM