A blonde dogsitter extraordinaire and her pack of nine amazing dogs, slept soundly until around 9 A.M. on a snowy Sunday morning, venturing downstairs completely rested and ready for the day to begin. The dogs had emptied the upstairs water bowl during the night, and went straight for the full one in the kitchen. Strange, she thought—they seem unusually thirsty.

She went to open the curtains on the sliding glass door before starting the breakfast routine, subconsciously noticing the clothes basket full of dog coats and sweaters on the bar stool next to the counter. Oddly there was an item that didn’t look quite right, buried beneath the winter clothes. Barely visible to her eye, she gently pulled it out of the pile to have a closer look. It didn’t resemble anything wearable, and she was now perplexed over this wet, slimy, unrecognizable, thing in her hand. Turning it over again, it slowly dawned on her that it looked like the cloth food bag, turned inside-out, that had been on the counter containing at least 2 pounds of dog kibble, belonging to none other than a yellow lab called Forty West, RockDog’s bestie. Scanning the counter, she confirmed her suspicions—the bag that had once been full of dog food, was indeed missing. What the hell? She can only surmise what might have happened the night before. . .and she still can’t believe it. 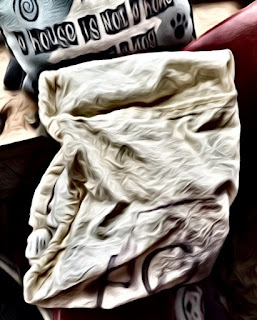 After she left for dinner, leaving nine dogs home alone, apparently somehow, some way, someone jumped and grabbed the food bag off the counter, knocking it onto the floor, scattering kibble throughout the dining room for a free frawl scavenger hunt. Most likely instigated by two chowhounds (not mentioning any names), but probably all eight dogs had their noses deep into it. Only Billy Idol continued to snooze by the fire, oblivious to the commotion.

So that explains the unquenchable thirst and the need for extra trips outside for potty breaks. But the mystery remains. Why were there no holes in the bag? It was merely slobber-soaked, but otherwise intact. And, how on earth did they get the bag into the clothes basket that was sitting on a bar stool? Had they originally knocked the bag into the basket, it would have surely toppled onto the floor during their food frenzy. And, who was the clever dog that hid the evidence under the other clothes? That was obviously done on purpose.

Of course another likely scenario could involve the lone, blonde cocker spaniel, the mischievous one that swipes wine every chance she gets, has been known to eat a Big Mac and jumbo fries in a nano-second, and then poop whole French fries for an entire day. Not to mention the bundt cake she gutted in mere seconds. The one that would have been completely gone had she not been caught devouring it on the bistro table that she had obviously leaped and landed on, quietly. The dogsitter was aghast to see crumbs flying around the table, and the other dogs catching them in midair below. This lone cocker jumps tall buildings for a single crumb, and is their hero. So, just maybe. . . 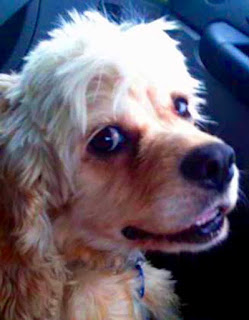 She leaped from the floor, landed in the clothes basket, pulled the bag of food off the counter into the nest  of sweaters, and proceeded to eat the entire contents while the other dogs watched from below, in amazement. Maybe she dropped some kibble for them. She then rooted around enough to cover the evidence and quietly jumped back into the pack with a perpetual smirk on here face, as seven other canines watched in awe. Whatever happened in those few hours, was carefully covered up and not obvious. And so, although suspicions are strong about this scenario based on previous incidents, the question has to remain—whodunit?

They (or she) almost committed the perfect snag. Had the dogsitter extraordinaire not noticed the corner of an unknown item in the clothes basket and investigated further, she wouldn’t have missed the bag of food belonging to Forty West, as he won’t be back in camp for a couple weeks. By that time, the rotter(s) would have been home free because who would have remembered the night in question?

And, the rub? Well, the dogsitter can’t accuse any dog of this heinous crime because there is no evidence; they were not caught in the act of swiping food off the counter. She knows they did it, they know they did it, but no one is talking. And, so it goes. . .

Her life with dogs is never boring. . .