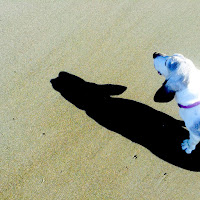 And so it goes, a blonde dogsitter extraordinaire, with a wanderlust disorder that has laid dormant for over 6 months due to an inordinate amount of canines guests at dog camp—and a staff that has gone fishing for the summer—loaded 5 cocker spaniels and a basset hound into a Subaru station wagon appropriately called ‘Soobie,' for a marathon 450-mile round-trip ride to Anchorage on a sunny Tuesday morning. The over-the-top excited dogs quickly realized that this was not just a trip to Homer town or the beach, but rather an outing requiring multiple naps along the way. The weather was amazing with temperatures rising in the 70’s. The sunroof was open, and the cruise control set at 65—a perfect day for a road trip adventure that would span the next 12-plus hours, with only one small hiccup initiated by a lone basset hound called DoDog.

AnnBanan, the rescued cocker spaniel from southern California—the mischievous, wine-drinking, leaping tall buildings for a crumb, girl—had an important date with an ophthalmologist for an exam to determine whether she had a cataract that needed surgery. Normally a road trip to Anchorage would be an overnight adventure but today the RV Minnie was enjoying a few days at the Anchor River on a fishing expedition with guests, leaving only a Subaru or a VW bug available for transport. Finding a motel that accommodates six dogs is no small feat during tourist season in Alaska, or anytime, for that matter. The blonde would have preferred a visit to the Alaska State Fair in Palmer with her grand boys, but after locating a motel that would accommodate dogs and humans, it was discovered that said motel had a reputation for spreading bed bugs to their guests. The original plan was immediately abandoned and a round-trip to see the eye doctor was decided upon instead. This particular ophthalmologist only visits Alaska once a month and scheduling an appointment is often done weeks in advance. So, getting there on this particular day when no canine guests were booked into camp, was important. 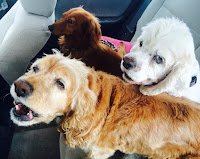 The normal 4-hour summer drive north reached an epic 5-plus hours due to multiple stops along the way. An elderly black lab called Jackie was dropped off for foster care, gas/oil was needed for Soobie, and finally a stop for a decaf Americana and six dog treats from the barista at the Black Water Bend drive-thru.  Automatic cruising was lovely on this glorious morning, but soon interrupted by road construction with traffic stopped and waiting in line, eventually inching forward at a mere 40 MPH for over twenty miles, adding an extra 45-minutes to the journey.  Boss Bunny was doing her job of barking at all large trucks at the site, and chasing them the length of the car, back and forth, over and over.

That being said, the blonde had allowed extra time for a walk before the eye exam although the allotted time was definitely cut short due to several traffic delays along the way. Nevertheless, twenty miles outside of Anchorage City limits the sign for Bird Creek trail was visible and Soobie whipped into the available parking lot. Only a few cars were parked so the possibility of a quiet, quick hike to stimulate noses, relieve bladders and exercise stiff muscles was much anticipated. The group had an hour before the scheduled appointment time. As the blonde struggled to get the required leashes for three of the dogs out of the travel bag, the excitement inside the car was infectious as six dogs whimpered, whined and wiggled their butts causing the car to vibrate to and fro.

Finally, repeating the command “stay” in her stern authoritarian voice, the blonde was able to open her car door, leash the two dogs that would most likely not come back when they were supposed to (not mentioning any names), along with sweet Guinness who is by nature a plodder, much slower than the other rambunctious hikers and often headed in the opposite direction of the pack. Time was of the essence so an orderly walk on the trail to accomplish the business at hand was expected. The three unattached dogs were doing what they were supposed to while the blonde struggled with the other three on leash, a basset hound in particular that insisted on getting the leash wrapped around her legs while innocently pretending she knew nothing about how to walk on one. DoDog has always marched to her own drum in a most persistent manner.

Reaching the top of the first hill, the group met two men on the trail and chaos ensued. They were asking the blonde directions to the creek, and it was soon determined that the water was indeed in the direction they had just come from, as they were almost back to the parking lot. They apparently had not walked far enough so they proceeded to turn around and head back. The free dogs were greeting the unexpected visitors, while the leashed dogs (one in particular) were walking in circles causing the blonde to get tangled up and come to a complete halt. She looked down to see how to get out of her predicament, and was aghast to find the end of one leash dangling with only an empty collar at the end of it!

ANNE! She automatically screamed before realizing that Anne was looking up at her as if to say, “What?” along with Guinness standing next to her. That could only mean one thing, OMG it’s DoDog, as the blonde looked up the trail just in time to see the white tip of her tail disappear in the bushes. The two men tried to grab her, but missed. 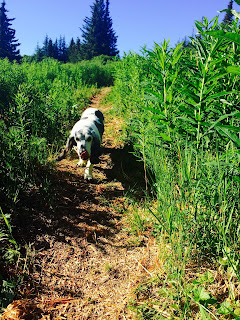 SHITTTT, the blonde shouted, to no one in particular. Scurrying the other five dogs back to Soobie while apologizing for having to cut their walk short because of an unruly hound dog, she cracked the windows and left them in the hot car as she ran back up the trail. By this time, a crowd of hikers had gathered and were smiling, pointing straight up a steep incline. And there she was, the lone escapee, loving all the attention and looking more like a mountain goat than a low-to-the-ground basset hound wearing a smirk on her face. The blonde let out a shrill command: ZIPPY, (her name when she’s in trouble) to no avail. DoDog’s nose was still glued to the ground and she barely looked up, although she could obviously tell by the intense tone of the command that she better pay attention.

The two guys that were present when the escape nonsense started, were hiking their way up the steep trail in an attempt to capture the dog, with the blonde close behind. The other hikers were along side the trail looking on. By this time, 14-year old DoDog was ready to slow down and be coaxed down the mountain. But to save face she meandered a little longer, before giving it up and coming close enough for the blonde to snap the leash and give her a minor scolding in front of her new fans. People were clapping as the blonde descended the incline with a happy dog leading the way.  A dog that was totally spent—her fun had quickly come to an end and the back seat of Soobie with the comfy dog bed waiting in the sun, was calling her. Had this been a few years earlier, the blonde could have forgotten any such luck and would have sat waiting for her to return when she was good and ready. As it were, after saying her goodbyes to those involved in her freedom run, DoDog was lead back to Soobie where she immediately jumped in the hot car with the other 5 dogs, and settled in for a much needed nap still donning the perpetual smirk. 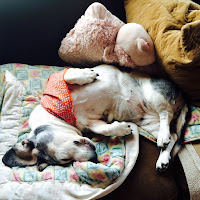 And the blonde dogsitter extraordinaire, with her pack of 5 cocker spaniels and an ill-behaved basset hound, continued driving the last 20 miles to the Anchorage clinic while reflecting on the joy the dogs bring—even with the escapades that are only funny after the fact. Snoring sounds were in unison from the backseat—the only music in the car. Her life is good, and she is grateful to be in the company of canines most of the time.

After all the dust had settled on this hot afternoon, she managed to arrive at the schedule appointment 10 minutes early.