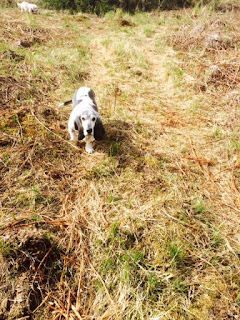 If you have ever had a hound dog, this story will make total sense. They can be the most adorable, lovable creatures ever, but their behavior when they don’t get what they want, can be spiteful and downright hateful. Basset hounds have a hilarious sense of humor, but they are also the most stubborn dogs on the planet. They want what they want when they want it. And, if they don’t get it—you, the human will pay.

Our usual routine at dog camp is when all the dogs need a potty break they stand at the back door and wait to go out—all eleven of them,  minus a lone basset hound called DoDog, asleep under the covers on the couch. When they return and get settled in, DoDog then marches to the back door with an ARF, letting us all know that it is now her turn in the loo. I open the door and watch her descend the stairs where she immediately poops in the walkway, taking a few more steps to relieve her bladder, then continues on for a stroll while I grab the pooper scooper and wonder why she can’t go in the bushes like the rest of the dogs. It's only a few steps over the hill, where the moose and bear do their business. After all, we are surrounded by woods and tundra. Good grief! She meanders the yard, barking at this or that, causing the entire house to erupt with 11 dogs running to the window to see what she sees, which is most likely, nothing. She just loves to cause a ruckus.

This behavior continues, as she ignores all my attempts to lure her back inside so I can get back to work, knowing full well when I do she will want back inside. Exasperated, I return to my desk in the loft, and the other dogs settle down as there is nothing to see outside except a hound dog moseying around with her nose to the ground. As I ease down into my chair and start typing my thoughts before they escape me, I hear the familiar ARF at the back door—the signal that it is now time for the Queen to come inside and find her spot underneath the covers, especially on a rainy day like today. Not wanting to lose my moment of inspiration, I continue typing and ignore the occasion ARF at the door, which incidentally gets louder by the minute. Finally, when the distraction becomes too much to concentrate, I run downstairs to let her in the back door, and of course, she is no longer there. 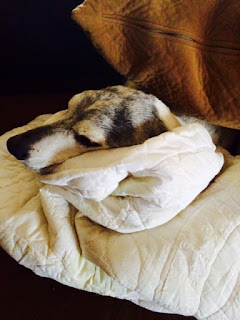 I call her, she ignores me. I go outside in the rain to look for the silly dog and gasp—when I see her lying down in the middle of my new flower bed, the one that has a gazillion dollars worth of freshly planted perennials. She knows she is not allowed in it, but instead of hustling her butt out when she sees me raging forward, she merely looks at me with a smirk on her face, daring me to run her out. And I do, like a mad woman running toward her shouting, she scurries out of the bed with her tail tucked between here legs, running to the back door and making it inside in a flash. She is now underneath her blanket, on her couch, snoring. Occasionally I see her legs twitch and suspect she is dreaming of running from my wrath, that she knows sounds far worse that it really is. Somehow, someway, she miraculously missed lying on any plant while making her intended point. 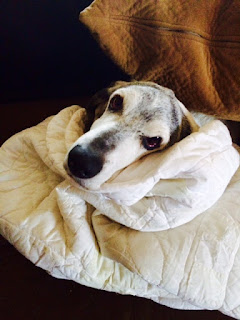 Silly Dog, rooted down in a pile of blankets and pillows, with a face I cannot be mad at (for long). And she knows it! Grrrr. . .  Isn’t that just like a DoDog?