A friend of mine called while I was on vacation to see if she could drop a dog off at TBTB Dog Camp. Cindy had graciously agreed to keep JackDog for a friend that had to fly back east at a moments notice. Once Jack arrived Cindy quickly found out that it was going to be more work than she bargained for since Jack decided to take over as top dog in her house of two laid back females. Well, that wasn’t going to work because Bette is submissive anyway and was simply allowing Jack to push her around. Poor Bette Cocker!

I did not want to impose a problem dog on my brand new dogsitter, so I told Cindy I couldn’t do it. This was on Friday and I was coming home on Monday evening and would gladly take Jack off her hands if she hadn’t found a solution by then. She was sure the problem would be resolved sooner than that. However, on Monday I received another call saying yes, she still had Jack and he needed to go as he was seriously pushing the girls around and causing chaos in her home. He had taken over the household and she didn’t know what to do about it. No problem, bring him over on Tuesday morning.

Cindy called at 9:30 AM on her way up the hill, thrilled at the prospect of having this dog out of her hair, so to speak. Jack got out of the car at TBTB and was obviously very bonded to her. I’m sure he was frightened because his mom had left in such a hurry and he had no clue what was happening. Cindy brought him in the house, all 12 lbs. of him. He is a Jack Russell mix and has an adorable look with one ear sticking straight up while the other one flops over. 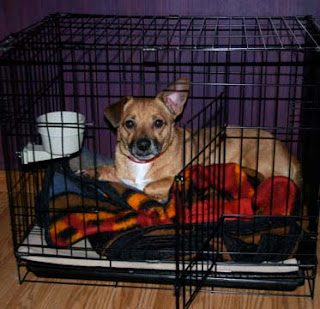 He seemed friendly enough. I had put most of the dogs in the bedroom so that Jack could get in the house before being swallowed up in the pack. Only a few of my spaniels were at the door to greet him. Cindy put him down on the floor and Bunny went up to shake his hand (via a butt sniff) and he immediately attacked her at Cindy’s feet. Cindy of course tried to stop the snit by putting her boot in the middle of the chaos. I grabbed Jack up and told her that she needed to leave so I could get Jack incorporated into the mix of dogs quickly. Jack watched her leave and even whined at the door for her. He immediately went for Bunny again and I let them go for about 10 seconds before sternly yelling my favorite line: “KNOCK IT OFF,” and they did.

I told Jack there would be no fighting in the pack and put him in his crate for a timeout. After a few minutes I opened Jack’s crate door, and slowly introduced all 11 dogs to him. He was extremely fearful, not knowing what to think and doing lots of growling at all potential butt sniffers. Normally I leave the dogs to work things out for themselves after establishing my position as Top Dog. Things appeared to be going pretty well when Jack lunged at Bear, an Old English Sheepdog weighing over 70 lbs. 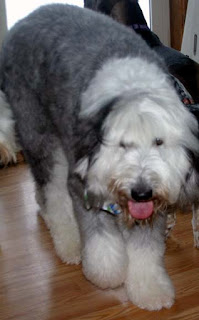 Well Bear would have none of this nonsense and immediately took Jack Boy to the ground with lots of growling. Jack was squealing like he was really hurt, when I told them both to knock it off. Of course all nine other dogs were gathered around in the cheering section. Jack was fine, without so much as a scratch on him. Bear had simply made his point and Jack immediately changed his attitude. He no longer seemed fearful and had a better understanding of where he fit into the pack.

It has been five days now and Jack is a new dog. He loves all the pack members and especially likes to wrestle with RockDog and Mocha. We now have fourteen dogs in camp and needless to say there has been no more snits in the group. Jack is a quick learner and figured out that sniffing butts is a lot more fun than getting into a scary altercation. He never really wanted to be the intimidator but that’s what he knew when he came here. He has a whole different attitude now and is actually having a blast at dog camp. He came here needing to be on a leash but not anymore. He loves being in the pack so much that he runs, plays and stays with all of us on our walks. He’s a happy boy, well actually a tired boy as I write this - fast asleep in his crate with the door wide open, after a day of running and wrestling. 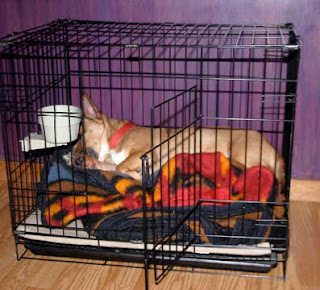 It’s important for a new dog coming into a pack to find his place in the social order of the hierarchy. Jack realized early on that he does not have to be a pack leader and it’s much more fun and a lot less work, to just be part of the team. He is perfectly content with me as the Pack Leader at TBTB Dog Camp!