Tales of a Dogsitter - Monday, Monday 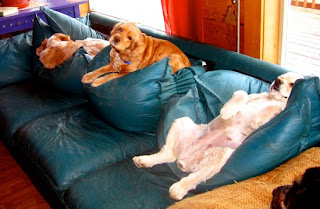 On my way downstairs I pass the leather couch covered with sleeping dogs and realize it’s true what my friends say. If you are sitting on my couch, you are taking up a dog spot. I can't remember the last time, if ever, that I actually sat on the couch. If I did the dogs would be all over me because the fact is, like most everything else here, the couch belongs to them. Nothing is sacred in my house of dogs.

When I want some down time I get in my bed and work on the computer and/or read to get away from the hordes of them, but of course even there I have six dogs vying for position on the bed and it's a cluster until everyone finds their spot, circles twice and settles in. And then a lone dog that I won’t name has to be sandwiched in next to me, pushing against the computer eventually disconnecting the power cord. I shove him back a few inches so I can plug my Mac back in and then move my legs over a bit to accommodate his comfort. Finally all is good until I have to get up for something, which means of course everyone else gets up too. When I return to the bed the whole settling-in process is repeated. Once all that is done alas, I can maybe get some work done or at least feel like I can focus on something other than furry creatures that follow me everywhere including the bathroom insisting on being petted while I take a pee. It's exhausting, but also special. I'm not complaining just merely stating how it is at TBTB. 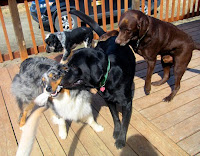 Today is Monday and the sun is out, the front door is open and the dogs are in and out racing on the deck. I am preoccupied with fixing their gourmet breakfast of oatmeal, bananas, and eggs covered with Greek yogurt, and when I turn around OMG. . . a blood bath. A trail of the red, sticky stuff is covering the floor from the deck through the dining area into the kitchen. All eleven dogs are licking, smelling and walking in it; there are blood prints everywhere - a likely scene from a horror film!

One of the sheepdogs has a bloody beard and front legs. I search his head, feet, and mouth along with all the other dogs and can't find where the blood is coming from. I wash the floors in the house, hose off the deck along with the dogs and call it good. The flow of blood has apparently stopped. The dogs just want to wrestle more, so obviously no one is seriously injured. All of this before I'd had my first cup of coffee/tea, or anything else for that matter.

A few minutes later after the final paw prints have been wiped from the floor, I look outside to see the sheepdog's beard again covered in dark red blood dripping off his chin. I grab my gloves, warm water, peroxide, and cotton balls, determined to find the source. After searching through the sticky wet fur on his face and head, I finally find a teeny scratch on the brim of his nose. It is so small that it is barely noticeable, but when I push on it the blood oozes out. So that's it! A micro-cut in an area without much skin, that bleeds and bleeds and bleeds. The vessels are so close to the surface that the blood flows freely from this tiny opening producing enough hemoglobin to simulate a massacre. With the mystery solved, the dog cleaned up and the alum stick applied to BearBoy’s scratch, at last it is time for a doggie breakfast and my first cup of coffee of the week! Bloody Hell, what a morning! ☺ 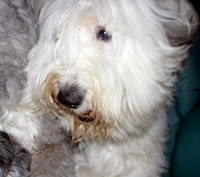 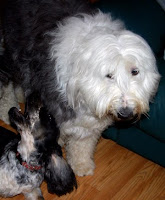 Or, something like that. . . just another Monday in the life of a dogsitter!