Tails of a Dogsitter - A Dog Named Finnbar 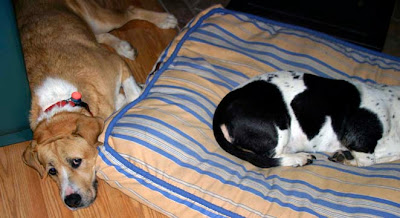 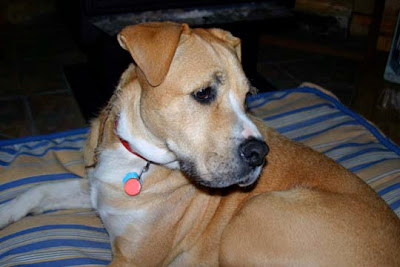 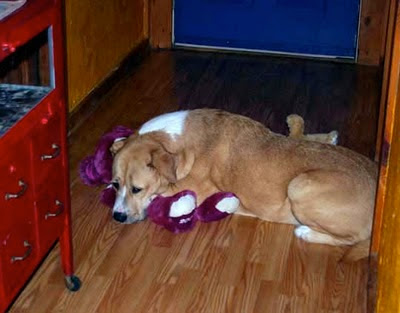 I lay down next to him on the cold floor at the vet clinic – my face nuzzled into the fur of his massive head, inhaling the smell of the sea where we had just been. He consumed a full jar of his favorite Yummy Chummy treats before the sedative took effect, and then all ninety-four pounds of him slowly slid down into the warmth of the soft sheepskin rug. I stroke the wiry fur on his face and whisper what a good dog he is and how genetics are not his fault. The lethal liquid is slowly seeping into his back leg but I see only his face. I am strong for him, although I feel soft and vulnerable inside. I tell him I’m sorry and I love him as I kiss the top of his beautiful head. He licks his lips twice and just like that, his heart stops. I imagine his spirit rising out of his body and floating upward toward the sky to join the celebration waiting for him at the Rainbow Bridge where friends like OgDog, Maggie, Duke, Chula, Roxanna Danna and Bridger are waiting. The tears flow freely down my face. All my strength is completely drained out of my being and the release is inevitable.

Minutes earlier we had been at Bishop’s Beach with two raw sirloin steaks cut into small pieces. The tide was out and except for the occasional dog and owner passing by, we were alone on our walk. He enjoyed seeing the other dogs on the beach and eagerly ran to greet them. The playful ones could easily entice him into a game of chase – although it was a short one, as today he preferred my company and the steak. I told him everything, the decision that had been made, why it was made, what to expect and how I would be with him until the end. He trusted me.

He passed through my world for a reason that only time will reveal. Over the past week he has instilled strength in me that I didn’t know I had. His presence caused me to question my belief that all dogs could be saved. Apparently some cannot and he was one of those. I wonder if I did everything I could, if I tried hard enough? My mind continues to ponder these questions while my imagination creates a different ending to the story. . .you see, abstractly because of what happened with me, he was laid to rest. . . forever.

I can’t help but wonder why the universe arranged for me to be in this particular situation at this time in my life. Me, of all people, I don’t even believe in capital punishment. I can’t seem to wrap my head around interfering with nature and that is how I see taking a life, whether it is man or beast. Nevertheless, I remind myself this was not my decision to make. He needed a friend and I was it. There was no other choice except to go with him in the end. . . My favorite mantra played over and over in my head, “everything is as it should be at this moment.”

Finnbar came to TBTB last fall for his first visit, integrating well into the pack and forming friendships with various dogs. He particularly liked to lay in front of the fire with Zippy, the Basset Hound. The owners told me he was territorial about his food, a behavior not that unusual for some dogs. I simply fed him outside on the deck away from all the others, and there was no problem.

It was a real surprise to me when the owners were offered jobs in Old Harbor and could not take him with them because he had growled at a small child in the village. That too didn’t seem so unusual as kids can be frightening to dogs that have never been around them. They were devastated but rather than take him to the shelter, they asked for help in finding him a new home. I was happy to write an ad for craigslist that did produce a single, retired guy in Cordova that wanted to adopt him as a hiking buddy. Perfect, Finnbar loved to hike. Logistics were such that Derrick was unable to get the ferry to Homer for another two-weeks after the owners were to leave, so I agreed to keep Finnbar at TBTB until the time he could be picked up by his new owner.

Finnbar enjoyed the activities in dog camp, particularly our walks on Bishop’s Beach and resting by the fire in the evening. He played with any dog that was willing to run with him. After a few days I brought some new stuffed animals home for the pack. Ironically it was a stuffed bunny that was the center of an incident with Bunny, my rescued cocker. They were playing and all of a sudden Finnbar grabbed Bunny by the ear and she yelped. I grabbed him and he immediately let go. Her ear was punctured in three places and blood was gushing onto the floor. I scolded him and tended to her injury not thinking much about it, rationalizing that they merely had a snit over a new toy and he hadn’t meant to hurt her. After all Bunny does has a reputation of being the bossy girl in camp. Fast forward two-nights later. . .

The dogs shadow me in the house, following me from room to room. Dinner was over and I was washing dishes with all six dogs in the kitchen around my legs – certainly nothing out of the ordinary. Suddenly Finnbar grabbed Annie, my other rescued cocker, by the neck and began shaking her like a rag doll. He was no match for her, outweighing her by at least 70 lbs. I yelled at him to stop, but he would not. I then grabbed him around the neck and we wrestled to the ground but he still hung on to Annie. I remember thinking he was going to kill her before I could get him off. Finally, after what seemed like an eternity he released his grip on her and she ran upstairs, while I put him outside on the deck. Annie had a gaping hole on the left side of her neck, blood was flowing everywhere and I could not get near her, she was so traumatized. She underwent emergency surgery to repair the ripped flesh and torn muscles in her neck and jaw area resulting in multiple stitches and the insertion of a drainage tube. Her major blood vessel had barely been missed, and the vet said it looked like the attacker was definitely going for the kill.

After learning that Annie was probably going to survive I was then able to reflect on what had happened. I pride myself in never having a dogfight at TBTB Dog Camp. I’m very aware of dog body language and can easily head off a potential snit before it becomes a problem. This was different. There had been no growling and absolutely no warning. It was a quiet pounce and an immediate death grip. The scary part was that he would not listen. Unlike the earlier situation with Bunny, this was a frenzy. Noisy dogfights are usually not serious, and in contrast the silent ones can be deadly. The only noise during this attack was Annie’s desperate screaming.

Finnbar was placed in a crate because now I could not trust him. I immediately called the owners and also the potential adopter. Over the next several days, the owners made a decision based on the unpredictability and severity of the attack, and the fact that he had recently growled at a child. They determined Finnbar must be put down so he could never harm anything else. Over the next week they made the arrangements by telephone. I was asked to drop him off at the local animal shelter and they in turn would take care of having him euthanized. In the meantime I was desperately trying to come up with different options, all of which turned into dead ends – no pun intended.

What happened that fateful night in the kitchen? Was it coincidental that Finnbar attacked the two rescued cockers and not my other dogs? Did he sense a weakness in them and self-confidence in the others? Or, did he recognize that they too had been shelter dogs like he had once been? Both altercations occurred at my feet - was he becoming territorial over me? Did he miss his family and act out in frustration for being left behind? Were these isolated incidents that would never happen again? Or, were they merely a precursor of attacks to come? These questions played over and over in my head.

In the end, the reason for the aggression didn’t matter. The fact was the attack was vicious and unpredictable and was very close to being fatal. I spoke to several dog behavior specialists and everyone agreed that grabbing and shaking is a very serious offense and usually means a death sentence for the offending dog. He was not adoptable – the risky behavior could not be passed on to someone else. All the experts agreed with the owner, Finnbar should be put down. Time was running out. I did some major soul searching and decided there was no way I could drop him at the shelter to go through this alone. I knew I had to go with him and try to explain the why of it to both of us.

I understand the ultimate decision. What would I have done had he been my dog? In my soul I knew it was right, but my heart was still broken. I had bonded with this dog, and loved him as I do all dogs. I had forgiven him. I wanted to find him the perfect home – one where he could once again be the only dog and have people who adored him as much as his previous owners. I wanted to believe it would never happen again, that he could be saved. I wanted so much to believe. . .

This was by far the hardest thing I’ve ever done as a dogsitter. It was my decision to stay with him, but for me there was no other choice. I couldn’t walk out on him when he needed a friend. Writing has been a form of therapy for my soul. It has forced me to articulate and separate the facts from the emotions, and in the process find acceptance. His memory remains etched in my psyche.
Posted by K at 3:57 PM